HomePoliticsImplement Gowon’s 3Rs before 2022 or.. - Ohanaeze To Buhari
Politics 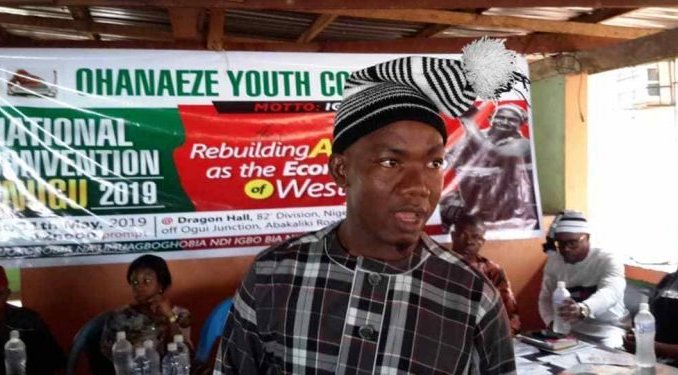 The President Muhammadu Buhari-led federal government has been asked to consider implementing the Reconstruction, Reconciliation, and Rehabilitation programme of General Yakubu Gowon before 2022 or risk Nigeria’s continuity as one political entity.

The youth wing of the apex Igbo socio-cultural organization, Ohanaeze Ndigbo, has told the stated that failure to meet up with this appeal could jeopardise Nigeria’s Unity.

National President of Ohanaeze Youths Council, OYC, Igboayaka. O Igboayaka, in a press statement, warned should the federal government fail to address the issue as quickly as possible, Igbo youths would have no option but to fully join the growing agitation for self-determination.

‘The prolonged wave of ethnic agitations particularly in Alaigbo was due to failure to properly implement the post-war reconciliation programme of the Federal Government,’ OYC declared.

According to Igboayaka, the major reason for the resurgence of Biafra agitation is basically due to the mismanagement of  Gowon’s 3Rs policy which the military government put in place to erase the scars of war.

The statement read in part: ‘I think we have to begin to tell ourselves the truth and also of necessity learn to separate perceptions from reality. We cannot do this or move forward without a rigorous pursuit of the truth.

‘We consider Biafra a historical fact. When the word Biafra is mentioned or even being discussed, it should be done not under the table but on top of it. To those who are using Fulani to cause the problem in Nigeria, Biafra is a threat to them, yet their hook of imperialism tendency just to control their economic empire in Nigeria, should earnestly advise Nigeria Government to speedily implement 3Rs policy, or be ready to see the manifestation of their fear of Biafra in large proportion because similar agitations like Biafra has shown up and will be grown out of external and internal control at the end of 2022.

‘The history of the Nigeria-Biafra war has become part of the history of Nigeria. Hence there is a need for a national conversation on the country’s most weighty calamity since self-rule. The continued avoidance of such a national discussion of Biafra cannot be a smart thing to do as doing so would amount to sweeping under the carpet, a significant portion of our national history.

‘If a society studiously pretends that part of its colossal and catastrophic history did not happen, such society would only be investing on the repeat of same in a mindless effort to hide it from its younger generations. We strongly hold that Nigeria cannot survive another war.

‘It was the failure of Nigeria to vigorously and successfully implement the Three Rs(3Rs) policy that was partly responsible for the establishment of Movement for the Actualization of the Sovereign State of Biafra (MASSOB) and the Indigenous People of Biafra (IPOB).

‘It is well known that there have been so many protests, riots and recently, even terrorism in Nigeria since the end of the civil war. I think our leaders ought to be having a real epiphany right now with what is contemporaneously happening in the Northeast.

‘This is because if you fail also to keep the promises of rebuilding that region after the devastation of Boko Haram if you let the hopes invested in the promise of that rebuilding die like the Three Rs,(3Rs) especially reconstruction and rehabilitation, you can also be sure that the children in IDP camps today will grow up and ask questions. Their disagreements with the state then will intensify feelings of deprivation as IPOB members and other pro-Biafra groups feel today. I believe that the issues generated by the national question that caused the Biafran war are still very much with us.’

OYC believes that although hostilities ended on January 15, 1970, Nigeria has been engulfed in another kind of battle to keep the country together and tackle the myriads of socio-political and economic problems that initially created the environment for conflict.