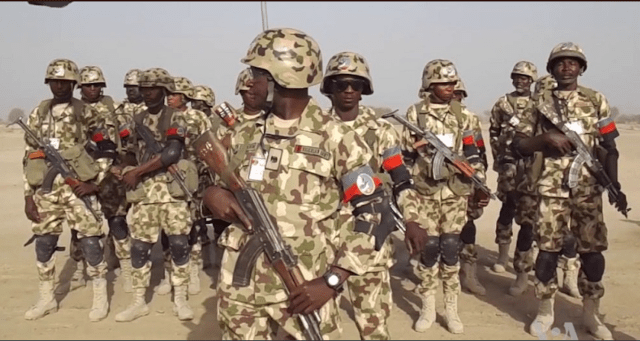 At least 11 suspected men of the underworld were killed on Wednesday when soldiers engaged them in a fierce gun battle in Aba, the commercial hub of Abia State.

The killings came barely a few weeks after gunmen killed some policemen in nearby Abayi, World Bank Estate Police Station, and 48 hours after three policemen were ambushed and murdered by hoodlums in Abiriba, Ohafia Local Government Area of the state.

Read Also: ‘I Picked Abaribe From The Gutter’ – Orji Uzor-kalu

It was gathered that gunmen numbering about 50 at about 8.30pm on Tuesday stormed the popular Ariaria Junction, on the Enugu/Port Harcourt Expressway, ostensibly to attack soldiers manning the area.

Available information was that before the gunmen arrived at the scene; soldiers on duty had garnered intelligence and were on the red alert.

It was equally gathered that immediately the hoodlums arrived, they opened fire on the Soldiers, but the soldiers replied fire.

It was gathered further that In the gun duel that lasted for over 30 minutes, 11 of the hoodlums were found dead. There were, however, conflicting reports about the number of casualties. Some people said 16 persons were killed, among them a soldier while a military source said 11 of the gunmen were killed while there was no casualty on the side of the Army. After the shootout, soldiers were said to have recovered pump-action guns, some bullets, and bracelets tied on the killed hoodlums’ arms believed to be charms to prevent bullets from piercing their bodies.