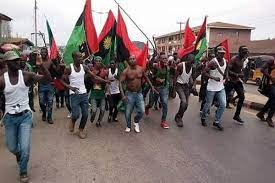 The Indigenous People of Biafra (IPOB) has reacted to a report that the Nigerian Army and police killed 16 operatives of the Eastern Security Network (ESN) in Aba, Abia State.

In a statement signed by its Media and Publicity Secretary, Emma Powerful, the group declared that the security agents selling lies to the Nigerian people noting that they did not kill any ESN operative while asking the security operatives to publish the exact camp of the ESN it attacked and show videos and photos of their operations.

According to the drop, the statement was to refute a media publication by Sahara Reporters, where it says a military source had told it’s correspondent that hundreds of security operatives on Tuesday night launched a heavy attack on the camp of ESN in Aba, Abia state, killing about 16 of them and injuring others. According to the online news platform, the operation was in response to a series of attacks against security personnel in the South-East.

Reacting, Powerful said, ‘Ask the army and police to show pictures or videos of those ESN operatives they killed. Army, police, air force, including all the other security outfits in Nigeria, cannot do ESN anything, not when they killed innocent citizens and they tagged them ESN operatives.

‘Ask the soldiers to disclose where ESN camp is located and how it looks like. Don’t mind the army propaganda machine because we know them before they come, they can’t deceive us. ESN is rooted and Nigerian security agencies cannot come across them.

‘ESN is out to defend and protect our land and forest; nothing they can do to stop us. Let them come; we are waiting for them. Let them show the bodies of those they claimed to have killed. Nigerian soldiers should stop lying to the public.’