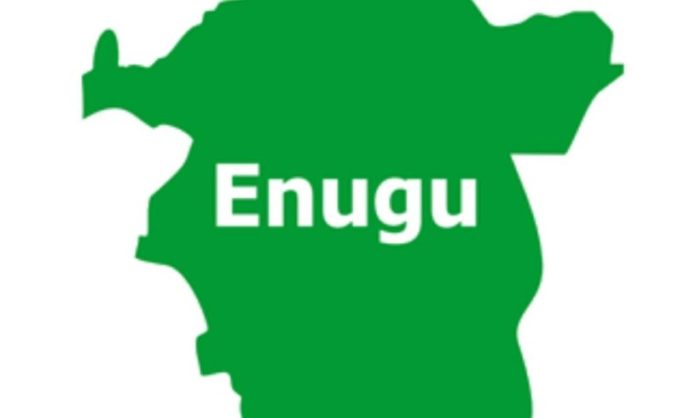 According to reports, the tension started brewing early in the morning after disagreements over proposed modalities for the election metamorphosed into full violence as the chairman of the electoral committee, Chief Samuel Ugwuanyi, and other electoral officers ran away from the venue of the exercise for fear of being harmed.

Read Also: Enugu: Nobody Was Ostracised In Ishi-Ozalla – Community Leaders

This led to gun shots and violent exchanges between security operatives drafted to the area and some individuals, while loyalists of the major contestants fiercely marched round the community chanting songs of victory and resistance.

The arrival of the Commissioner for Rural Development, Chief Emeka Mama brought the situation under control as he addressed the already tensed crowd, assuring them that the election had been cancelled and no decision will be taken against any of the candidates.

Chief Emeka who promised to personally take over the conduct of the election on a rescheduled date condemned the violence that trailed it. He reminded the different camps that they were relatives despite their different interests.

One of the contestants, Mr Festus Omeje, blamed the violence on the refusal of some contestants to abide by the electoral guidelines stipulated for the election.

‘What happened was that there are some aspirants who in one way or the other did not meet up with the expectations as provided in the electoral guidelines. The chairman of the electoral committee is a man that is known in the community.

‘He is a transparent man that wants transparency but along the line, because of interests among the contestants the election could not hold. We believe that this issue is going to be resolved amicably so that we can have a new leadership.

Another contestant, Mr Emmanuel Jonathan, however, accused the electoral committee chairman of bias, wandering why he decided to disqualify some candidates in the morning of the said election.

“I am happy that the commissioner has decided to handle everything that has to do with the election and the town union himself. I think that it will solve the problem because Emeka Mama is a peaceful man. He has been exceptional in handling all issues arising from this election.

On his part, the Secretary General of Alor Agu Progressive Union, Chief Chukwuma Eze, called on the state government to immediately set up an interim administration to rescue the community from descending into total anarchy.

‘What happened today is quite unfortunate. It shows that Alor Agu community is not yet conducive for any election to be conducted. We have similar issues in the Igweship election which is still pending. I blame what happened today on bad leadership.

‘Personally, I call on Enugu State Government to immediately constitute a caretaker committee to take over the affairs of Alor Agu Progressive Union. Our tenure will end by 31st of this month and from all indications, the community is not yet ready to conduct any election. So I appeal on the state government to constitute a caretaker committee that will be comprised of men of integrity.

‘Failure to constitute a caretaker committee could lead to anarchy because at the end of 31st March and there’s no election, Alor Agu will have no traditional ruler, and no town union executives. Alor Agu will be in total anarchy. So they have to act fast to save a very ugly situation’.