HomePoliticsNo Level Of Propaganda Against IPOB Can Save Nigeria - Kanu
Politics

No Level Of Propaganda Against IPOB Can Save Nigeria – Kanu 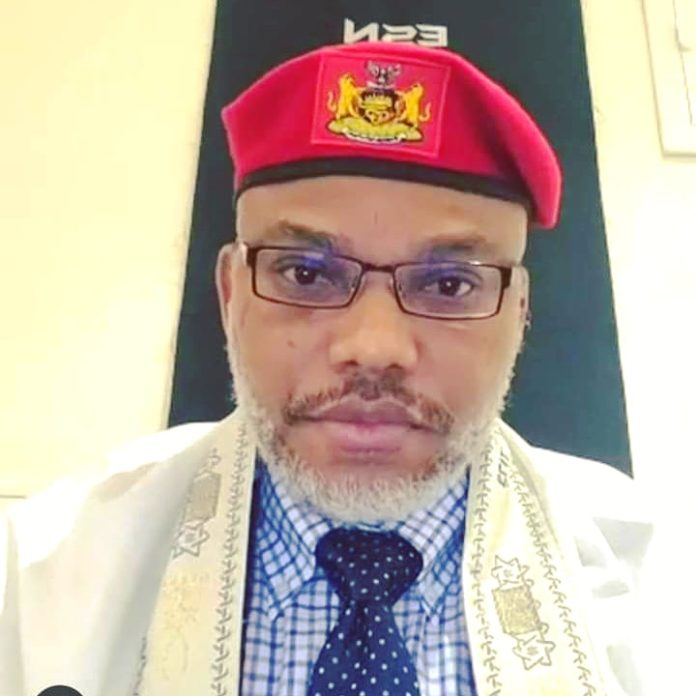 The leader of the Indigenous People of Biafra (IPOB) has stated that no level of propaganda or lies circulated by Nigerian authorities can cause division within the ranks of the secessionist group.

Kanu stated this on Sunday in a long post he made on social media where he warned Nigeria to desist from peddling falsehood.

The full post which was posted on social media reads:

Read Also: Ghana, Togo, Others Will Get Free Oil Under Biafra – Kanu

‘The ongoing DSS propaganda peddled by compromised brown envelope #Zoo media on #IPOB registration status is NOT only silly but laughable.

‘As the legal icon Barrister, Alloy Ejimakor quite rightly observed, ‘what confers legitimacy on an Independence movement is not registration but its mass appeal & the charisma of its LEADER, which IPOB has in quantum. Registration is but a matter of legal convenience’.

“Having duly noted the above, DSS and their friends in the Lagos-Ibadan cash and carry Gutter Media Association of Nigeria must answer the following questions:

‘1. Why is DSS using the name of a non-existent group it concocted, with no traceable name nor face to it, to be dancing naked in the marketplace? Why are newspapers like Vanguard and Tinubu’s Nation newspapers peddling this black lie? Does it mean  #Zoo newspaper journalists are too hungry or shameless that they would repeatedly publish what they know to be a lie in order to please their Fulani Janjaweed masters in DSS Abuja?

‘2. What would it cost all these brown envelope journalists that litter the Gutter Media in Nigeria to simply Google IPOB on their smartphones to find out the answers that would nail their lies to the mast and shame all of them and their masters in Abuja?

‘3. When will these so-called phantom Igbo groups address the media in a live chat if they exist?

‘4. What became of Okwudili of REIPOB, another DSS imaginary creation that was meant to replace me?

‘As well as pastors, Imams, politicians and security services, media houses in Nigeria are equally contributing to the pain and suffering of the masses. Their love of lies and brown envelope makes them more dangerous than all Fulani terror groups combined.

‘If this nonsense about IPOB registration is designed to undermine the confidence millions repose in IPOB, then they are wasting their time because #ESN has come to stay. Very soon our Oduduwa brethren and those from the Middle Belt will launch their own version of our cherished and most beloved Eastern Security Network.

‘The British created damnable Zoological Republic of Nigeria is gone, no amount of propaganda will save it’ It concluded.