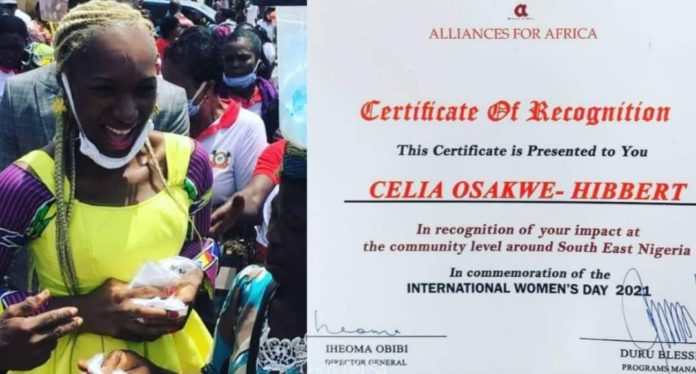 Every year, Alliance for Africa in commemoration of International Women’s Day, put together a few selection of Women who are radical change-makers in south-east Nigeria. This list is painstakingly drawn from several nominations submitted from across the south-east of Nigeria. The “Impact-Women Recognition” is aimed at recognising and amplifying the efforts of women who are making visible impacts in the community.

The Special Adviser to the Imo State Governor on Diaspora Affairs received this prestigious Award over the weekend. A representative of AFA Organisation whilst congratulating the SA on Diaspora in a zoom chat, commended the Imo Governor’s Aide on her impactful visibility; recalling some of the works the Special  Adviser on Diaspora carried out in schools, the mentorship of young girls, campaigns on rights of women, representation at the VAPP Bill public hearing in Imo House, collaborations with various NGOs, importation of ‘best practices’ from Diaspora, promotion of rights of Women living with  disabilities, coordinating Covid-19 palliatives distribution for disadvantaged communities amongst numerous other activities. The AFA representative revealed to Cllr. Celia Osakwe-Hibbert that their Organisation received multiple numbers of strong nominations on her behalf, thus are happy to give this prestigious Award to her.

Read Also: We Have Come To Support Youngsters – SA Diaspora

The Governor’s Aide responding to some of the comments thanked the Alliance for Africa for finding her worthy of this prestigious Award and pledged to continue to use her platform to support the growth and development of Imo-State. SA Diaspora stated that, “I’m lucky to be serving under a government that allows me to voice my opinion no matter how sensitive, I’m proud that Governor Uzodimma promotes women’s participation in leadership and governance as clearly seen in the demography of his appointments made so far. This is why people like myself suddenly are able to take part in nation building. I also thank the Imo Diaspora community for all their encouragement, advice and support. I thank my friends and most especially my family for the unwavering support…”

In July 2012, Alliance  for Africa was granted consultative status with the United Nations (UN) Economic and Social Council (ECOSOC). A.F.A is a human rights organisation that advocates for the protection of human rights; advocate for gender justice, they promote equality and non-discrimination, as well as promotion of peace, security and conflict resolution intervention.

It is worth mentioning that it is very rare for a serving official of a Government to receive this kind of award as organisations like AFA are completely non political.