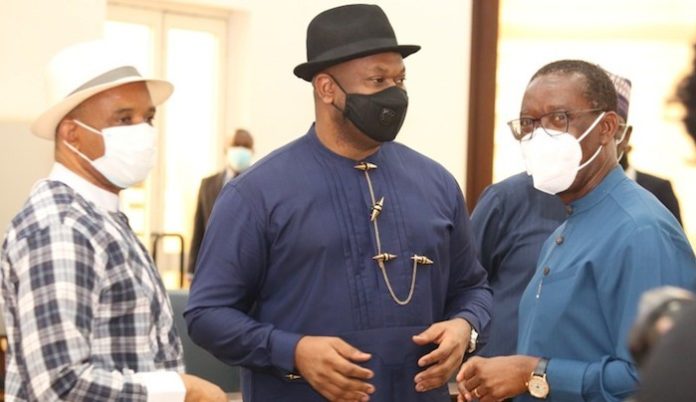 Okowa stated this when the Director-General of NIMASA, Dr. Bashir Jamoh, and his management team visited him at Government House, Asaba.

He commended the management of the agency for reaching out to stakeholders in the littoral states in its determination to develop the maritime sector.

He said that the take-off of the Maritime University in Okerenkoko had brought peace to the Niger Delta and pledged the support of the state government to the growth and development of the university. The governor acknowledged that NIMASA has done well in Delta, but needed to do more to enable the state to reap the dividends in the maritime sector.

According to him, I appreciate the effort of NIMASA in the establishment of the Maritime University in Okerenkoko. The school should be developed to international standards because of its uniqueness and for it to produce adequate manpower needed in the maritime sector. ‘Indeed, the coming of the university gave birth to peace in the Niger Delta and we must appreciate NIMASA for its contribution.

‘I am aware that we have been having issues with the ship repairs and building project and we will be happy to see this industry established to complement the university.

‘We are aware that a lot of scholarships have been given to Deltans and I must register our appreciation to NIMASA,’ Okowa stated.

He called for the opening up of the nation’s ports because of their importance in economic development and job creation, saying a well developed maritime business has the tendency to address major challenges in the nation’s economy