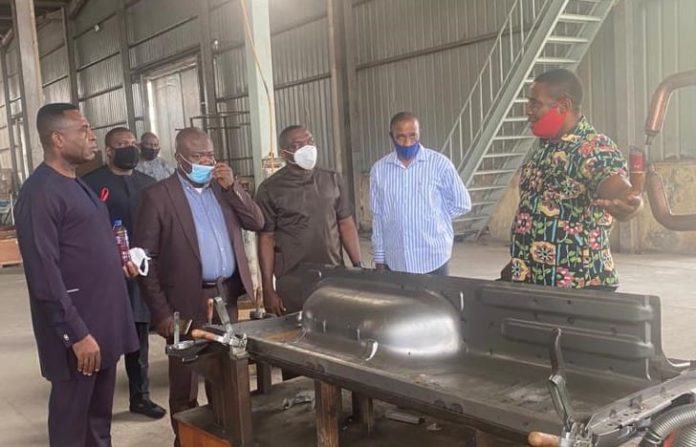 The Niger Delta Development Commission (NDDC) has announced that it has concluded plans with Innoson Vehicle Manufacturing Company to train indigent Niger Delta youths on technical skills at their facility.

This was made known in a statement issued by the commission’s Director of Corporate Affairs, Mr. Ibitoye Abosede, and made available to newsmen on Sunday in Port Harcourt.

Abosede quoted the NDDC’s Interim Administrator, Efiong Akwa, as stating this after inspecting facilities at Innoson’s factory in Nnewi, Anambra.

Read Also: Innoson Should Be Celebrated For Industrializing Igboland – Mbisiogu

Akwa, who was represented by his Special Adviser on Youths, Mr. Udengs Eradiri, said that the training would commence at Innoson Kiara Academy, a technical and vocational institution, affiliated to Innoson.

‘The youth will be trained in fabrication, assembly, painting, and corrosion control, among others.

‘We thought that due to the growing economy of the Niger Delta, it is important to begin to grow our own skills to be better and able to manage our economy.

‘Though NDDC is already in partnership with Innoson on the training of youths in different aspects of automobile maintenance, this visit is to firm up the partnership,’ he said.

Akwa said that the commission decided to train the youth, with a focus on setting up a vehicle manufacturing plant in the Niger Delta in the near future.

He stated that the Presidential Amnesty Programme had trained several youths from the region in the facility, with good results.

‘So, we are aware that the training facility teaches skills, altitude, and entrepreneurship.

‘We know that if the youth learn one skill or the other, they should be able to translate it into financial gains,’ he said.

According to him, the region is blessed with so much talent that needed to be harnessed and channeled into constructive use, for the industrialization of the Niger Delta zone.

‘Innoson Group will, in due course, set up workshops in the Niger Delta zone, in collaboration with organizations like NDDC,‘ he assured.