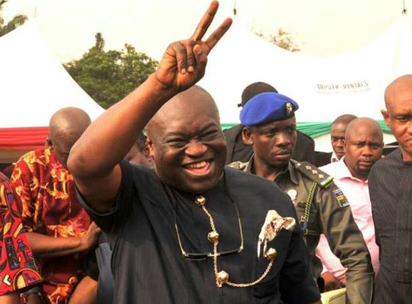 The roads commissioned were Eziukwu (which leads to the Eziukwu/Cemetery Market), Milverton, and Ojike Lane.

This brings the number of such roads rebuilt and commissioned in the commercial city of the state in the last two weeks to seven.

Speaking while commissioning the roads, Ikpeazu said his administration’s interest in the Eziukwu Road was the Eziukwu/ Cemetery Market which he said was one of the markets that made Aba what it is today.

Ikpeazu said his administration wouldn’t have given Milverton Avenue less attention as it serves as the luxury bud terminal of the commercial city.

‘Anybody coming to Aba for business from any part of the country or outside the country must get to Milverton because of its strategic nature of being the city’s luxury bus terminal.

‘What used to be of these roads, not lasting after reconstruction, will no longer be. The commissioned roads will give us 30 to 35 years life span’, the governor assured.

He called on residents to ensure the roads should last by not blocking the drains with refuse.

The deputy governor, Ude Oko Chukwu commended Ikpeazu for building roads in the state that would stand the test of time.

He urged the people of the state to continue to support the Ikpeazu administration, promising that more dividends of democracy were in the offing.

The Prelate/Moderator of the Presbyterian Church of Nigeria, Most Rev. Nzie Nsi Eke while cutting the tape to declare the roads open, commended Ikpeazu for reconstructing the roads which he said would help in the economic growth of the city.

Luxury Bus Owners Association of Nigeria, through its chairman, Chief Jerry Ani, commended Ikpeazu for reconstructing Milverton Avenue and other roads in the city and pledged their support to his administration.

The event was attended by dignitaries from all works of life including traditional rulers.