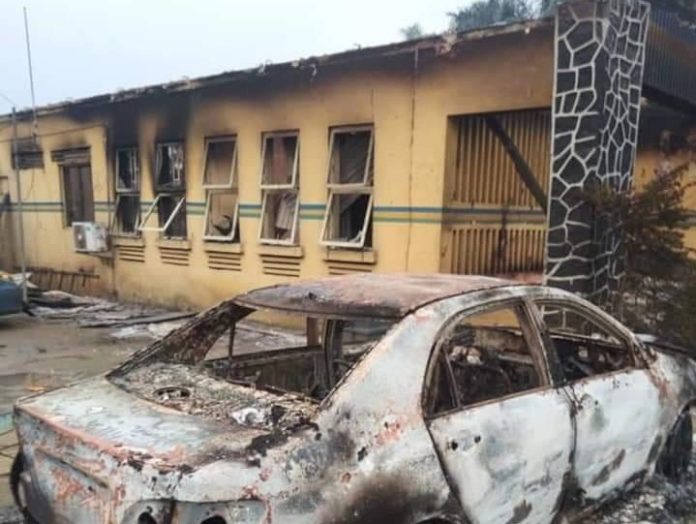 Rivers Police Command said about 500 hoodlums suspected to be members of the proscribed Indigenous People of Biafra (IPOB) attacked four police stations in the State on Wednesday, taking advantage of the EndSARS protests.

SP Nnamdi Omoni, the spokesperson for the Police Command said in a statement on Thursday that most of the attacks were in Oyigbo local government area of the State.

According to him, at about 9.30pm on Wednesday, members of IPOB invaded Oyigbo and Afam Police Stations, setting the buildings ablaze and damaging about 15 vehicles, including one Armored Personnel Carrier (APC).

He added that the attackers killed two police officers and carted away some arms and ammunition.In another attack, the police command said rampaging IPOB members attempted to burn down the Mile One Police Station and the office of the police Eagle Crack Squad in the same area.

But he said the invaders were repelled by the police, with three of them killed during exchange of gunfire, while eight others were arrested and immediately transferred to State CID where they are currently helping in the investigation.

The Police Command assured that it has been able to stabilize the Command, though there are still pockets of threats from remnants of IPOB at the fringe communities in Oyigbo Local Government Area.

Omoni quoted Rivers Commissioner of Police, CP Joseph G. Mukan, as appealing to the people of Rivers State to remain calm and religiously obey the curfew imposed by the State Government.

The Police also assured that adequate deployments have been made to cover all the flashpoints to ensure that hoodlums are kept at arm’s length, while appealing to parents and guardians to warn their children to remain law abiding or else the full weight of the law will be brought to bear on them.

The Police said that the Rivers State has in recent times enjoyed fragile peace which the Police are poised to sustaining.

“For all intents and purposes, the State is bigger than anybody or group; hence we must all strive to entrench lasting peace in the State. The #ENDSARS protests and the consequential demands are being addressed by both the Federal and State Governments,” the police said.

The Command also warned that any attempt to undermine the security of the State will be resisted as  the constitutional duty of the Police to protect lives and property is sacrosanct and must be carried out in a most professional manner.