3 Houses Set Ablaze By Angry Villagers Over Killings In Imo 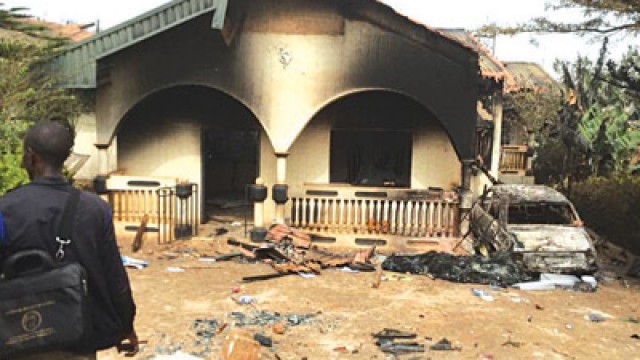 Three houses said to be owned by suspected killers have been set ablaze at Ekwereocha/Amakohia in Ihitte/Uboma local government area of Imo state, by angry villagers over the continued killings of members of the villages.

It was gathered from a source that the incident on Thursday followed the killing of a woman in the village.

The source said “The woman that was killed recently was living with a little child. They killed her because they felt the old woman recognized one of them.

Read Also: Many Injured As IPOB, MASSOB And Police Clash In Imo

“They did not only kill the woman they also matcheted the little child living with her, but fortunately the little child did not die as she later mentioned names of those that killed the woman, and as a result of this information, the police were able to arrest them.

“After the arrests, the villagers got angry and burnt the houses of those involved in the killings. It happened at Ekwereocha/Amakohia in Ihitte/Uboma local government area of Imo state.

“Three houses were burnt. It happened Tuesday night. This kind of thing has not happened before and they youths felt that if they don’t react that the killings will continue.

Confirming the killings and the burnt houses in Owerri, the Chairman Interim Management Committee, IMC, of Ihitte/Uboma, Chike Olemgbe, said the situation has been put under control.

“Immediately that incident happened, I called my people together and warned them not to take laws into their hands and that they should allow the laws be applied accordingly. I also called various security agencies and they answered me and intervened to calm the situation.”

Chike said before the woman’s killing, one Oluchi Osuji killed in 2016. So many governments have come and gone, this government said it is not going to continue. We moved in and we have been able to arrest some suspects.