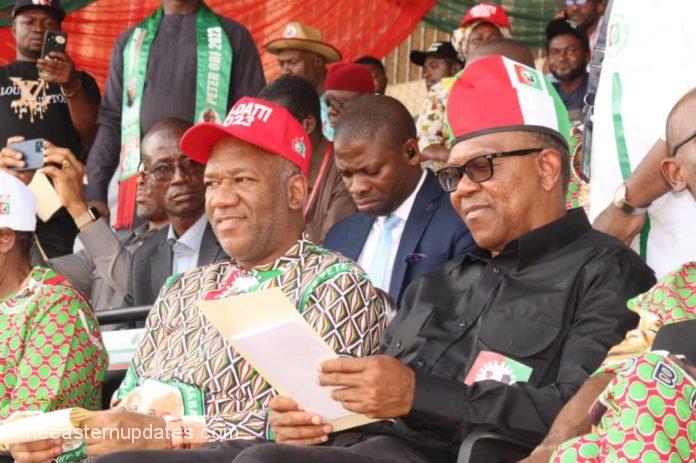 The Presidential Candidate of the Labour Party (LP), Mr. Peter Obi assured the people of Kogi State of his commitment to resuscitate the Ajaokuta Steel Company if elected Nigeria’s next president in the 2023 general elections.

The former Governor promised to bring prosperity to all the three senatorial districts of Kogi, with the enormous resources endowed naturally by God.

The Eastern Updates reports that Obi made these promises on Tuesday in Lokoja, during the LP presidential rally in Lokoja, Kogi capital.

He expressed optimism that a functional Ajaokuta steel project, would bring about employment of millions of unemployed youths with economic prosperity, among others.

‘Steel industry is very important to the development of the economy, therefore, we will liase with professionals and experts who know what to do with the Ajaokuta steel company immediately we are sworn in.

0n security, Obi promised that his administration would secure the country from criminals, save it from collapse and unite its citizens with a view to returning the country to one family it was known years back.

According to him, the LP governnent will ensure that the rule of law and human rights are rooted firmly in the country, a development where nobody will not be oppressed.

On the welfare of workers, the LP candidate promised Nigerians to synergise with state governments to clear arrears of their minimum wage and other emoluments to boost their morale and increase productivity.

On agriculture, the former Anambra State Governor, described Kogi as a geo-political entity that could feed itself, process its endowed agrcultural produce for export to reduce poverty and propel the state to high level of prosperity.

Obi reiterated his commitment to change Nigeria from consumption to production nation, if elected as the nation’s president come 2023.

He urged Kogi electorates to do the needful and vote for LP candidates at all levels, assuring them that they would collectively make Nigeria great.

The labour party presidential candidate urged the people to reject other parties at the polls even if they bring money to buy their votes.

‘If they give you money, collect it and vote against them, becauae it is your money. Tell them you want to follow those who know the road, that you are tired of being in the wilderness.

‘2023 election will be about character, competence; who has the capacity and capability to bring prosperity to Nigeria, which required physical and mental capacity, and with your trust.

‘Tell them that the 2023 election is not about religious or tribe but about the prosperity of our nation,’ Obi said.

In his remarks, Obi’s running mate, Sen. Ahmed Datti, urged electorates to collect their Permanent Voter’s cards (PVCs) and vote for the LP candidates at all levels.

‘It is only the party that can change the narrative, eradicate poverty, hunger, and negative developments in the country.

‘We will keep our words, hold us responsible for our actions and inactions, if you voted us into power next year.

‘We will move the country out of poverty to wealth, stop the killing and start the healing, Nigerians should trust us with their votes,‘ Datti assured.

On his part, the National Chairman of the party, Mr. Julius Abure, also advised the electorate to vote for the party, assuring them that ‘LP is what Nigeria needs to solve her numerous social, economic and political problems.’

Earlier, the Convener of ‘Bring Back Our Girls’ campaign organisation, Aisha Yesufu, who was on the Presidential campaign train, told the mammoth crowd that ‘Nigeria needs Peter Obi as he represents fearlessness needed to address the insecurities in the country.

‘We are no longer safe in our own homes, we must vote for somebody we can hold accountable to provide good governance.

‘Our lives must be made matter, we must vote for someone who can make our lives matter, Peter Obi is the one.

‘Nigerian youths are tired,of knowing someone before you can gain employment, vote for inclusiveness, let’s give Nigeria a president that is competent and can deliver us’. Yesufu added.

The Eastern Updates reports that the rally was attended by party supporters from the 21 local government areas of Kogi, and other members of the society.