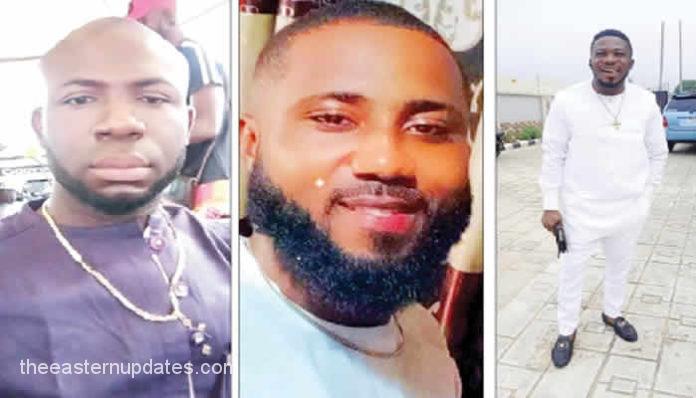 The families of three wedding guests have been thrown into confusion after they disappeared while returning from the ceremony in the Isiala Mbano Local Government Area of Imo State.

The wedding guests were identified as Alaefula Collins, Promise Mmadu, and Victor Chibuike.

The Eastern Updates gathered that the three victims attended the wedding ceremony in the local government on Sunday.

After partaking in the celebration, Collins, Promise and Chibuike, were said to have left the wedding venue for their respective homes but their whereabouts remain unknown.

Speaking with reporters, Promise’s brother, Fortune, said the sudden disappearance of the victims had been a serious concern to the families, adding that official complaints had been made to the police.

Fortune said ‘They left a wedding ceremony at Isiala Mbano on Sunday and didn’t get home. Up till now, we haven’t seen them. Their phone numbers are permanently switched off. We have sent them messages on their social media handles and no reply. We have reported it to the police.’

In a statement on Wednesday, an activist, Theodore Uba, said the victims went to the wedding ceremony in a gray colour Lexus RX 330 vehicle, adding that their families had declared them missing as their whereabouts were unknown.

The statement read in part, ‘The three young men, Alaefula Collins, Promise Mmadu and Victor Chibuike, who base in Owerri, Imo State, attended a wedding ceremony in Isiala Mbano LGA on Sunday, August 28, 2022, with a gray colour Lexus RX 330, have been unable to return to their respective homes after the event.

‘Efforts to reach them through their mobile devices and social media handles proved abortive. None of their family members have been able to figure out their current location up till now.

‘However, we have launched a search for them and have also reported the matter to the state Criminal Investigation Department, Owerri, Imo State, for their swift intervention.

‘If you have any information regarding the sudden disappearance of these three young men or update about this ongoing investigation, please contact me or report to the nearest police station.’

The state Police Public Relations Officer, Micheal Abattam, had yet to respond to an inquiry concerning the incident as of the time this report was filed.