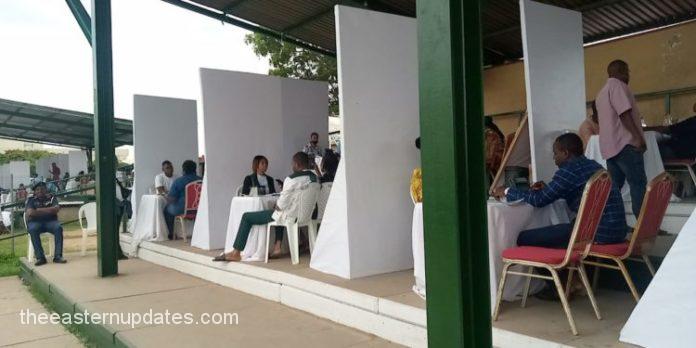 No fewer than two persons have been hospitalised after some yet-to-be-identified gunmen attacked officials of the Independent National Electoral Commission (INEC) in Igboeze North Local Government Area of Enugu State.

According to him, about two voter registration machines were damaged by the assailants during the attack

The statement which was obtained by The Eastern Updates revealed that the officers were attacked while on the Continuous Voter Registration (CVR) exercise at a Community Primary School Umuopu in Umuozzi Ward 19 in Enugu State.

He said, ‘The gunmen fired sporadically into the air to disperse registrants and registration officials. In the ensuing stampede, one of our staff sustained injuries and is receiving treatment in a hospital,’ the statement read.

‘Two voter registration machines and personal items of the staff such as mobile phones were lost.

According to Okoye, the Commission has reported the incident to police authorities in Enugu State to commence an investigation.

‘It will be recalled that on 3rd July 2022, our office in Igboeze North Local Government Area was burnt down by unknown arsonists. In spite of the attack, the Commission was able to continue with Ward-level registration with the assistance of vigilantes provided by the Local Government authority. It is one of the centres that has now been attacked.

The Eastern Updates can however confirm that the incident has been reported to the Police for investigation.