HomeFeaturesSowore, Apostle Suleman Others React To Assault On Odumeje
Features

Sowore, Apostle Suleman Others React To Assault On Odumeje 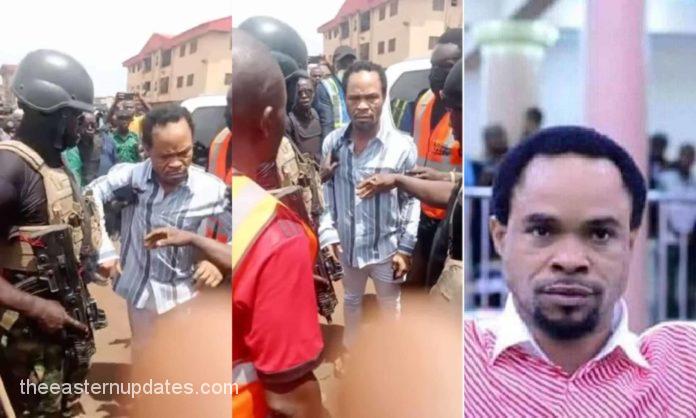 Apostle Johnson Suleman has heavily criticised the Anambra State Government and some of the security operatives who had assaulted Chukwuemeka Ohanaemere, known as Odumeje, during the demolition of his church in Anambra.

From the video circulating online, the security operatives had been captured shoving and slapping Odumeje while the demolishing of his church building was going on.

“I just saw a video of Pastor Odumeje being assaulted by operatives..that’s very primitive and uncalled for.

Those operatives overstepped their boundaries and I expect Governor Soludo to condemn it. It’s condemnable. highly!”

He said: “This attack on Pastor Chukwuemeka Ohanaemere “Odumeje” by soldiers/policemen are cruel, inhuman and a violation of his dignity, it amounts to torture and degrading treatment. The soldiers or policemen involved must be arrested and prosecuted.”

Demola Olanrewaju, on his part, said: “That assault on Odumeje is wrong, terribly wrong. Brutality of State forces with guns against civilians is sad, dehumanizing and a huge shame to all state forces who engage in it. I hope he presses charges and sees it through to the end. That video is sad and I’m not even a fan.”

Deji Adeyanju said: “The people that brutalized Prophet Chukwuemeka Ohaneme Odumeje after demolishing his church should remember that power is very temporary. We may not agree with everyone all the time but we will always agree on the dignity of every man.”

Meanwhile, the Anambra State Governor, Prof. Charles Soludo has given reasons for the demolition of Odumeje’s church.

A statement issued by Soludo’s spokesman, Christian Aburime on Thursday said the Mountain of Holy Ghost Intervention Deliverance Ministries, owned by Odumeje was an illegal structure.

He said Odumeje was served a demolition notice in April and that he did not vacate the structure.