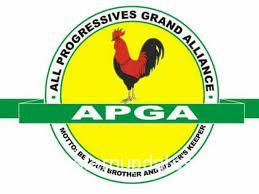 The Enugu State chapter of the All Progressives Grand Alliance (APGA) has called on the Independent National Electoral Commission (INEC) to expeditiously scale up the continuous voter registration in the South East amidst protest among many people in the state of lack of machines.
The gubernatorial candidate of the party, Frank Nweke Jr gave the advice while reacting to Tuesday’s protest at the INEC office in Enugu by a large number of potential voters, mainly youths, over their inability to be registered after days of waiting.
The protesters were chanting “PVC is our right” and “Give us machines,” among other issues.
The former Minister of Information also expressed dissatisfaction over the delay in ensuring that enough personnel and machines were deployed to the State and other parts of the zone.
Read Also: IPOB Reacts To Buhari’s Pipeline Vandalism Allegation
The Okeifufe Campaign Organization said the governorship hopeful had visited several registration centres and engaged with citizens who lamented how they spent weeks trying to get registered, all to no avail.
“That persistence is encouraging and speaks of a new dawn for our democracy. It is essential that the Independent Electoral Commission step up to the demands of the populace and provide what is required,” he said.
It will be recalled that the Electoral Commission had promised to deploy more equipment and personnel to the South-East after several requests had been made a few weeks ago.
But Nweke said that “It is saddening that citizens have to resort to a protest for a process that should be seamless. I am told that two additional machines were deployed to Okpara Square to satiate the protesters. More need to be done and quickly too. I have been to Okpara Square myself and the few machines there cannot serve the hundreds of people who go there to be registered every day.”
He, however, lauded the commission for extending the registration period by 60 days, noting that this was necessary to accommodate the number of people who were becoming aware of their civic responsibility and making the effort to get their PVCs.