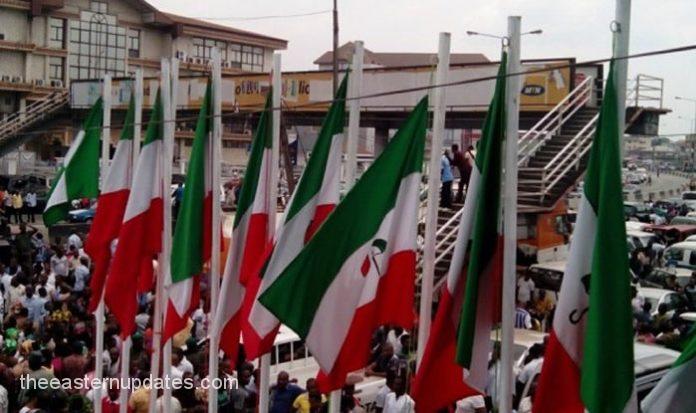 Less than 48 hours after the Independent National Electoral Commission (INEC) expressly declared that three-man adhoc delegates ward congresses did not take place in Abia State for the Peoples Democratic Party (PDP) after a court order aimed at forcing the National Working Committee (NWC) of the party to use a list purported to be outcome of the exercise was procured ahead of primaries in the State.

INEC had, in response to an inquiry by a lawyer on the status of the three-man adhoc delegates ward congresses for Abia PDP, said no election took place after the cancelled exercise earlier scheduled for May 4, 2022.

The order issued by Justice CU Okoroafor of the High Court of Abia State sitting in Aba stated: ‘The 1st to 5th Defendant/Respondent (PDP, PDP Chairman, Iyorchia Ayu; PDP Abia State Chairman, Allwell Okere, PDP national organising Secretary, and INEC), their agents, privies and employees howsoever described are hereby restrained in the interim from using, adopting or relying on any other list apart from the three-man adhoc list annexed herein as Exhibit ‘D’ as that has the name of the Claimant based on the adhoc election congresses or election of the 1st defendant (PDP) held on 6th May 2022 pending hearing and determination of the motion of notice.’

The order also restrained the INEC from ‘recognising and monitoring any primaries by the 1st defendant (PDP) sought to be conducted with any other delegates  list from the 1st defendant (PDP) other than the three-man adhoc delegates list annexed hereto as Exhibit ‘D’ which contains the name of the Applicant as one of the three-man adhoc delegates congresses or election held in Abia State on 6th May 2022 pending the hearing and determination of the substantive suit.’

The court adjourned till May 25, 2022, the day the Abia State governorship primary is scheduled, after the House of Assembly and National Assembly primaries would have taken place.

By the order, statutory delegates in Abia State have been barred from participating in any primary.