HomeFeaturesCOSEYL Fumes Over Burning Of Igbos' Shops In Sokoto
Features

COSEYL Fumes Over Burning Of Igbos’ Shops In Sokoto 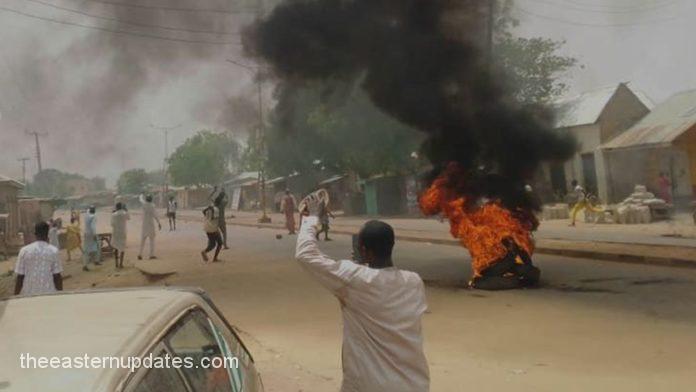 The Coalition of South East Youth Leaders, COSEYL, the apex socio-political youth group in the Southeastern region have put out an open warning which would be targetted against further attacks on Igbos residing in Sokoto State and their shops.

The Eastern Updates had earlier put our a reprort that pandemonium broke out in some parts of Sokoto State on Saturday following a violent protest by Muslim youths who stormed the streets to demand the release of the suspected killers of Deborah Samuel.

Recall that Deborah, a 200-level student of Shehu Shagari College of Education, Sokoto, was lynched on Thursday for allegedly insulting Prophet Mohammed.

After outcries across the country condemning the incident, some of the perpetrators were arrested by the state’s police command.

Angered by the arrest, a large number of Muslim youths stormed several streets destroying churches and shops belonging to Igbos.

Reacting to the development, COSEYL in a statement by its President-General, Goodluck Ibem, warned that any further move to attack Igbos and their properties would cause them to take dangerous actions.

The statement reads, “These attacks on law-abiding and innocent Igbo businessmen who have done nothing wrong to warrant such vicious and barbaric attack on them is uncalled for and we condemn it in its entirety.

“We warn the Sokoto indigenes to stop the attack and destruction of Igbo properties and goods forthwith. We want these miscreants to know that nobody has the monopoly of violence, they should stop or else, they will see us soon.

The coalition called on the Sokoto State Governor, Aminu Tambuwal to immediately arrest and prosecute those involved in the destruction of Igbo properties and churches.