HomeFeaturesSecond Niger Bridge Ready For Use Next Month - FG
Features

Second Niger Bridge Ready For Use Next Month – FG 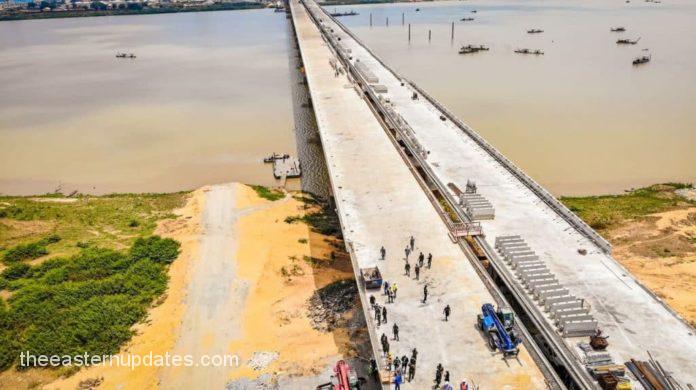 Federal Government has revealed that it will complete the second Niger bridge next month and ensure that it is commissioned before the end of the year before President Buhari leaves office.

Chief of Staff to President Muhammadu Buhari, Prof. Ibrahim Gambari made this revelation at the toll gates mounted at the Oko end of the bridge in Delta State on Tuesday when he visited the site.

He pointed out that tolling of the road and its concession were secondary issues to the government for now.

‘Let us finish this road and that is the responsibility of the Presidential Infrastructure Development Fund, to make the funds available, in conjunction with the Nigeria Sovereign Investment Authority (NSIA) to finish this road so that it will enhance the economic development of this area. That is the priority.  The good news is that by April 2, this bridge will be completed, and towards the end of the year, by October, Mr. President will come to commission it,’ he said.

Gambari was on a tour of the project alongside the Minister of Works and Housing, Babatunde Fashola as well as Minister of Labour and Employment, Chris Ngige.

While responding to questions on tolling, Fashola said:  ‘This will be a toll highway, and we have already gotten FEC to approve the national tolling policy. So this is going to be consistent with what we see around the world. If we want to be like the world, we must be ready to do what the world does.

‘In the national tolling policy, we made it clear that as much as it is possible when a road is to be tolled, there would be alternatives. So when this road is tolled, the old bridge is an alternative which is not tolled.’

The Eastern Updates recalls that the project was initially flagged off by the administration of Jonathan just a few months before he left office.