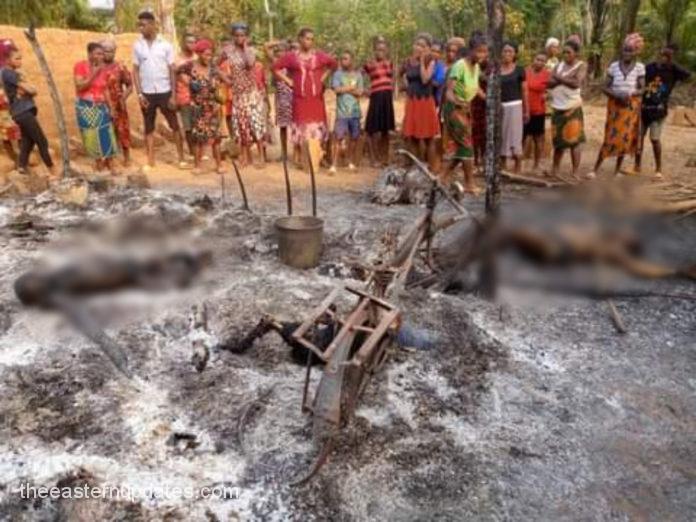 A mother whose name was given as Chigozie Onuobu, and her three children were among those burnt to ashes when as mysterious fire gutted their thatched house in Aguabata Echara in Ikwo local government area of Ebonyi State.

The Eastern Updates gathered that the ugly incident occurred on Tuesday night.

A member of the community who spoke to newsmen on condition of anonymity on Wednesday disclosed that the immediate course of the fire was yet to be ascertained.

‘We don’t know how the fire came about. It is also surprising that it was only her building that was gutted by the fire. Nothing in that house came out,’ he said.

A member of the family, whose name was given as Mr Samuel Okoro, who visited the scene alleged that the fire incident was intentional as there was no trace of bush burning around the building.

‘I don’t think it was not deliberate. There was no trace of bush burning around the building. Moreover, they have a separate kitchen where they cook. The woman is my cousin’s sister. Actually, the man married two wives but the first wife is not living with them in the same compound.

‘I was told that when some people called the husband of the deceased on the development, he nearly fainted. However, when we asked of him, the neighbourhood said they don’t know his whereabouts. Maybe they felt we want to beat the man or express our anger. But we will go back, especially when the burnt dead bodies are still there’, Okoro said.

Residents around the area who were mourning the untimely departure of the family called on the authorities to investigate the fire and unravel the mystery behind it to forestall future occurrence.