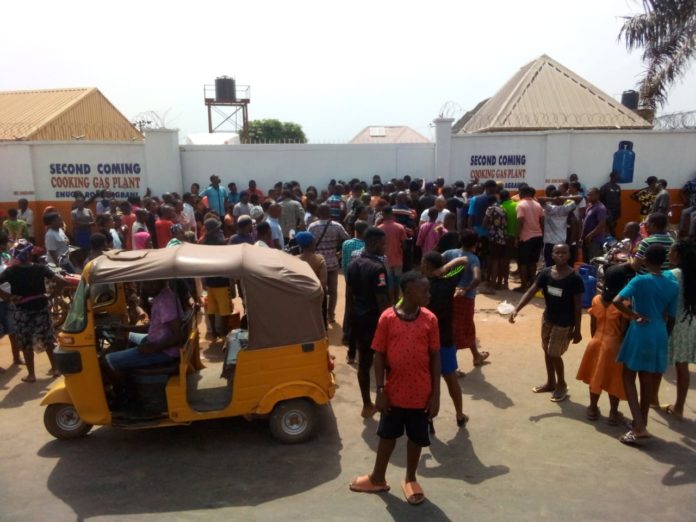 As part of efforts to mitigate the pains caused by the high cost of cooking gas during the Yuletide, A company identified as Second Coming Nigeria Limited, a major Liquefied Petroleum Gas (LPG) marketing company, in collaboration with the government of Enugu State yesterday donated 35,000 litres of LPG (cooking gas) worth N12 million to residents of Enugu state as part of its Corporate Social Responsibility (CSR) to ameliorate the suffering of the citizens.

While making the donation, the Managing Director of the company, Dr. Basil Ogbuanu, disclosed that the 35,000 liters (20,000 kg) LPG donation was part of the company’s support to government’s effort at ameliorating the suffering of the people who cannot afford the commodity in their kitchen this yuletide.

According to Ogbuanu, ‘ln the spirit of the Yuletide and as part of our Corporate Social Responsibility (CSR), also, in support of His Execellecy’s sterling leadership and good work to the people of Enugu State, each of our four plants in the state will give out 12.5 kg of gas to 400 people in four locations of the state. This is in conjuction with the Enugu State government to support the people of Enugu State during this festive season’.

Ogbuanu said that the product would be distributed freely to residents so that people would have gas to cook their food as they celebrate the birth of Jesus Christ.

He commended the state government for its focus and commitment in ensuring that businesses enjoy a friendly environment to thrive.

Ogbuanu, who holds a Ph.D. in Entrepreneurship, thanked all the loyal customers of Second Coming gas plants for believing in the company’s tradition of honesty and transparency over the years.