HomeFeaturesFG Plotting To Eliminate Our Lawyers, IPOB Cries Out
Features

FG Plotting To Eliminate Our Lawyers, IPOB Cries Out 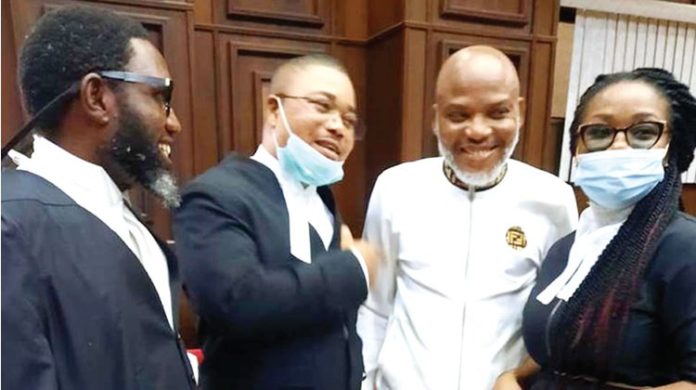 The Indigenous People of Biafra (IPOB) has raised the alarm over what it described as a secret plot by the Federal Government to eliminate its lawyers.

Spokesperson of the group, Emma Powerful in a statement which was made available to The Eastern Updates on Friday claimed that the Federal Government had launched the plot because of the good fight the lawyers were putting up to defend their leader, Nnamdi Kanu. He said the government wished to secretly eliminate the lawyers – Ifeanyi Ejiofor and Aloy Ejimakor ‘over their committed efforts in the defence of our leader who was renditioned from Kenya.

‘The Nigeria Government is not happy with the expertise and professional prowess of these veteran lawyers and other members of the legal team to deflate the fabricated charges against our leader, hence their plot to eliminate them,’ the statement read in part.

Read Also: No Election In Anambra, A Call For Anarchy – PFN Begs IPOB

Powerful said others on danger list include IPOB state coordinators, Mazi Benjamin Madubugwu, Bright Chimezie Ishinwa, Chidiebere Onwudiwe, David Nwawuisi as well as several others. The IPOB spokesperson alleged that the Nigerian government intended to carry out the targeted elimination through the security personnel deployed in the South East under Operation Golden Dawn.

He claimed the security agents have decided to eliminate Kanu’s lawyers once they step into any part of South East.

‘We want to place it on record that these lawyers have committed no crime but simply carrying out their profession as lawyers. The world should hold Nigeria Government responsible should anything happen to our lawyers and any of those listed above,’ Powerful pointed out.

He recalled that it was not the first time such plot would be hatched against the lawyers. Ejiofor, he noted, had severally escaped assassination attempts on his life.

‘His attackers have twice set his home on fire after killing so many people in his house. The world must take note and pay attention to the atrocities being committed in Biafraland by the Nigerian government.

‘South East remains our ancestral home and we cannot run away because we committed no sacrilege in our land. Anybody planning to kill us will be battling with the spirits of our ancestors and the spirits that own Biafraland.’

He said those imprisoned with Kanu in Abuja in 2017 should be at alert and conscious of their environment and movement.