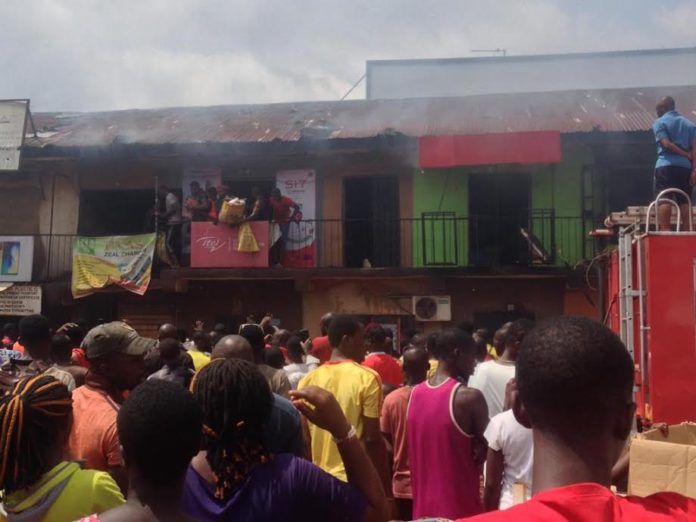 No fewer than twenty shops were on Monday razed by fire in Ogige Main Market, Nsukka, Enugu State.

The Eastern Updates gathered that the fire incident, which occurred around 12:30 pm, led to the destruction of goods and property worth millions of naira in the Phone Villa section of the market.

A source who pleaded anonymity told newsmen that the fire might have been from one of the shops and spread to other shops.

‘I was tracking down from Enugu Road when I saw people shouting fire! fire!.. pointing at the roofs of phone shops section of Ogige main market.

‘I don’t know what might be the cause of the fire since the shops are all locked because of sit-at-home order by the Indigenous People of Biafra (IPOB) being observed every Monday in the South East,’ the source said.

The source said further that over twenty shops were badly affected by the fire, adding that quick intervention of firefighters from Nsukka Fire Service helped to quell the fire and prevented it from spreading to other sections of the market.

Speaking with newsmen the chairperson of the market, Mrs Ngozi Ozioko said she was in the house when she started getting a series of distress calls from traders that part of the market had been gutted fire.

‘Immediately I called the fire service office in Nsukka and Enugu who responded immediately.

‘I thank God for their prompt response without that the entire market would have been destroyed by the inferno.

‘No shop inside the market is affected by the fire, only the shops in the Peace Plaza building are affected,’ she said.

The chairman however expressed concern about what could have been the source of the fire when the market shops were under lock and key because of sit-at-home observed in South East every Monday.

Ozioko said the market would set up a committee to ascertain the course of the fire outbreak and the cost of items destroyed.