You Will End Up In Jail – Deji Adeyanju Warns Obi Cubana 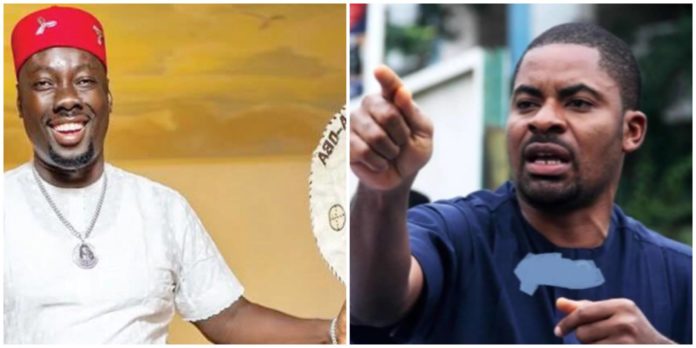 Popular Nigerian activist, Deji Adeyanju, has joined those questioning the source of Obi Cubana’s wealth warning that the showbiz mogul might end up in jail.

Adeyanju on his Twitter page called for caution as he opined that rich men don’t throw money the way it ‘rained’ at the burial ceremony at Oba, Anambra state.

Making reference to Hushpuppi who showcased his lifestyle on social media before he was arrested in Dubai, Adeyanju warned Cubana and others spraying bundles of Naira note to be careful of attracting the FBI and EFCC.

On his Twitter page, the activist wrote: ‘This was how some of us kept asking what Hushpuppi was doing that he was throwing money up and down but we were called names and insulted. Today, he is in an American jail.’

‘Hushpuppi once made several videos mocking me that I am jealous of him. That I should focus on politicians, activism and allow him to enjoy his money. Today, how far? We cannot watch you guys negatively brainwash young people and say nothing.’

Adeyanju further advised Nigerians not to be pressured to make money through illegal means like Yahoo, Kidnapping.