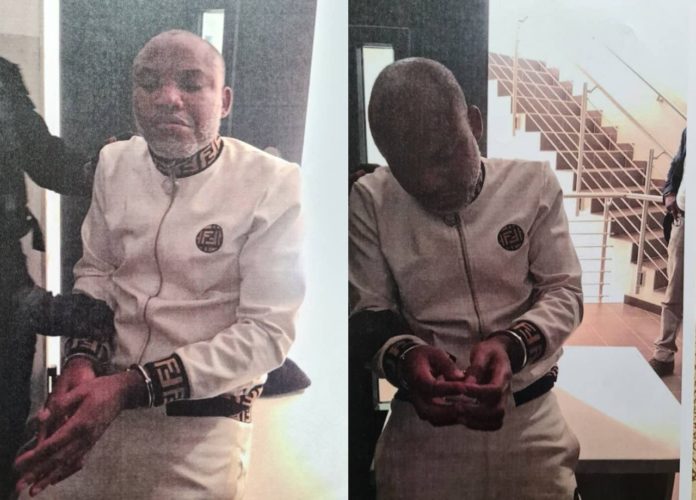 Igbo professional and intellectual think-tank group, Nzuko Umunna, has called on the Federal Government to ensure a fair trial and fundamental human rights for the Leader of the Indigenous People of Biafra (IPOB), Mazi Nnamdi Kanu.

Noting that the government is yet to provide details on the circumstances surrounding the ‘interception,’ the group hoped that ‘his arrest accords with international law and conventions to which Nigeria is obligated.’

Read Also: How Kanu Was Trapped With A Woman – Archbishop Chukwuma

In a statement by Executive Secretary, Mr. Joe Odumuko; and Deputy Executive Secretary, Dr. Uju Agomoh, Nzuko Umunna asked ‘the Government to ensure that Mazi Nnamdi Kanu’s fundamental rights are secured to the fullest extent possible. It is noteworthy that Section 31 of the Nigerian Constitution and Article 4 of the African Charter on Human and Peoples Rights obligates the Federal Government to ensure that Nnamdi Kanu does not suffer any bodily harm while in the custody of the state and its agencies. It bears repeating that it is the responsibility of the Federal Government to secure the bodily integrity and personal dignity of Mazi Nnamdi Kanu while in its custody. We shall hold the Nigerian Government and all state actors to account on this obligation under domestic and international laws to the fullest extent possible.’

It continued: ‘Consistent with the pressing need to guarantee Nnamdi Kanu’s fundamental rights, we demand the prosecution of any person or group that has issued threat to kill or inflict bodily harm on Mazi Nnamdi Kanu in the course of his trial. The government must demonstrate that it is not complicit in these repeated threats, especially as the purveyors have never been interrogated, arrested, or brought to justice.

‘We note that the trial of Mazi Nnamdi Kanu has been adjourned to July 26, 2021, and demand that the Nigerian Government and the judiciary secure his right to a fair trial as guaranteed by the Nigerian Constitution and under international law. Given that Nnamdi Kanu has been profiled as an enemy of the state, the need to ensure a fair and transparent trial becomes more urgent. Any effort to intimidate the judiciary must be discouraged by all stakeholders.

‘We urge the government to rethink its security and peace-building strategies and adopt a more conciliatory approach towards resolving national challenges. We note that most respected national leaders have called for a national dialogue to stave off the prospects of Nigeria becoming a failed state, and urge the Federal Government to key into this initiative. Instructively, a seeming predilection to the jackboot strategy has only yielded more sweat, blood, and tears for our bleeding nation. The killing of Mohammed Yusuf and its aftermath are still fresh in our minds, even as the followers of a detained cleric, Ibrahim el Zakzaky continue to press his case.

‘We urge the Federal Government to view the Mazi Nnamdi Kanu debacle as fundamentally a political case that must be resolved with uncommon wisdom. We cannot continue on the path of anarchy and ceaseless bloodletting that has seized our nation by the jugular for years. The Federal Government must show a commitment to listen to its restive youths now scattered across all regions of the country. A stitch in time saves nine.’