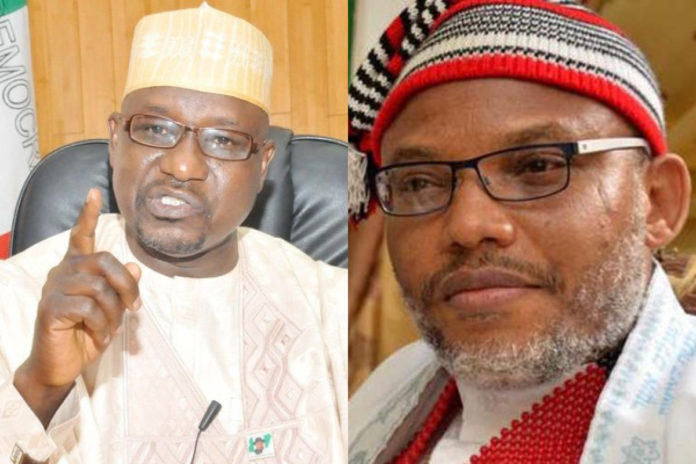 The Indigenous People of Biafra (IPOB) has denied having any involvement in the killing of a former presidential aide.

IPOB Media Publicity Secretary, Emma Powerful, in a statement, said Gulak has not done anything to the group to warrant such treatment.

Powerful said: ‘We, therefore, state without equivocations that IPOB knows nothing about the said assassination. In the first place, what threat did the late Gulak constitute to our cause to warrant his elimination. We had nothing in common with him and could not have in any way killed him.

‘Pointing fingers at IPOB for this barbaric act is only meant to divert attention from the real masterminds.

“This is the same way terrorists in security uniform commit various atrocities in South East and turn around to blame IPOB for their crimes just to tarnish our global reputation. This is purely a smokescreen to justify their long-awaited plan to declare another special military operation in the Eastern region to kill more innocent Biafrans.

‘Instead of the security agencies to properly investigate the incident and possible factors, they were quick to accuse IPOB of a crime we know nothing about. Did IPOB have the itinerary of Gulak to have waylaid him at the airport.’

Powerful urged the security agencies to beam their searchlight on his political opponents to establish the cause of his death.

‘We are not surprised that they quickly pointed fingers at us just as they have always looked for every opportunity to incriminate us to frustrate our struggle for Biafra restoration. But this too will not fly because the world is aware that IPOB is a peaceful movement. IPOB is not a terrorist organisation and does not spill blood.’

Powerful also challenged the Federal Government to institute a panel of inquiry to unravel the mystery surrounding Gulak’s death.

‘We challenge Aso Rock to institute an independent panel of inquiry to investigate the incident and expose those behind this gruesome murder of an innocent man. Our hearts go out to Gulak’s family. May his soul rest in peace,’ Powerful said.