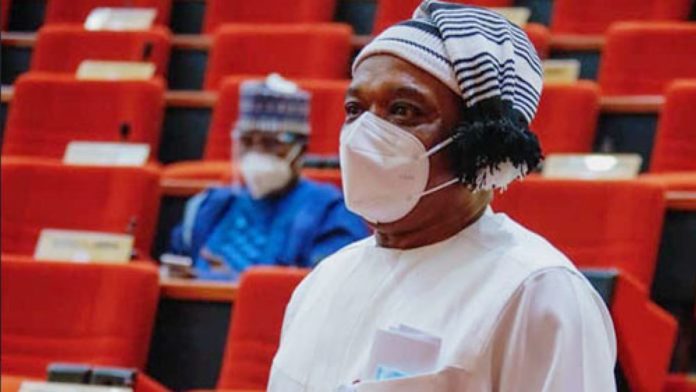 Former Governor of Abia State, Senator Orji Uzor Kalu has declared that the popularity of All Progressives Congress (APC) is enough to win Saturday’s bye-election for Aba North/South Federal Constituency.

The former Governor who has embarked on a ward to ward campaign since last week told the Clergymen there was no better time to be at the center and enjoy infrastructural development than now.

Read Also: You Are Still In The Gutter – Abaribe Tells Uzor Kalu

He said he was disappointed that since he left governance in 2007, nothing tangible has been done in Aba.

‘Those who knew Aba in 1998 before we came to power in 1999 will attest that we did a lot of work in Aba and brought glory to this city. But since we left, nothing has been added, there has been no improvement to what we did and the city needs more to take it to where it should be. And one of the fastest ways to do so is to be in the center. Aba needs to cast all their votes for the APC to make this work faster.

He said ‘Our popularity is enough to win the election for us and we won’t be distracted by the ethnic propaganda of the PDP. We expected the PDP to tell the people of Aba what they have done for them but unfortunately, there is none.

‘We are asking you to vote for us because we have reasons to do so. All APC lawmakers in the state have done well and have effectively used their Zonal Intervention Projects (ZIP) for their constituents.

‘This party (APC) believes in infrastructures more than any other and we will replicate same in Aba. The former occupant of the seat from APGA, late Hon. Ossy Prestige of blessed memory did very well. He graded many roads but we will add more to what he has done and asphalt many roads for you. The Abia PDP lawmakers have no history and sense of infrastructural development. Someone like Abaribe has been in the Senate for 16 years and has done no single project in his village Umuekwensu, to talk more of his Senatorial District’.

The clergymen also offered prayers for a peaceful election and stated their confidence in the APC coming out victorious.