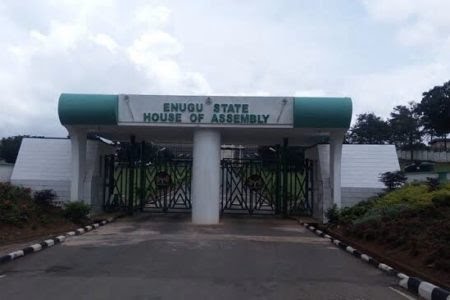 The controversial life pensions bill for former governors, their deputies, and spouses in Enugu which generated much outrage has been stepped down by the Enugu State House of Assembly.

The bill sought to appropriate at least 900 percent of a governor’s annual salary as his monetary entitlements every year after leaving office.

The wife of the governor would also have been entitled to N12 million as annual medical allowances provided she was married to the governor while in office.

Apart from the 12 million naira provided for a former governor’s wife as annual medical allowance, both ex-governor and ex-first lady will be entitled to free medical services until death.

The bill guarantees to cover almost any possible major expenses an ex-governor could incur in his or her life, including financial responsibility for burial.

Its section six states: ‘Where a former governor or former deputy dies, the state government shall make adequate arrangement and bear the financial responsibility for his burial.

‘It shall also pay a condolence allowance of a sum equivalent to the annual basic salary of the incumbent to the next of kin.’

Enugu State was only able to generate 12.2 billion Naira as revenue in the first half of 2020.

As soon as the bill passed through the first reading at the House of Assembly last Thursday, the Save Enugu Group (SEG) a socio-political group issued a 21-day ultimatum to the assembly to drop it.

Other stakeholders in the state also called for the bill to be dropped.

At the plenary session on Tuesday, Speaker of the House Edward Ubosi said the bill was not the making of the seventh Assembly but had existed since 2007, adding that the 1999 Constitution as amended, gave backing for such legislation.

Ubosi said the stepping down of the bill would help his colleagues to thoroughly go through it to enable them to delete as well as add necessary sections to it.