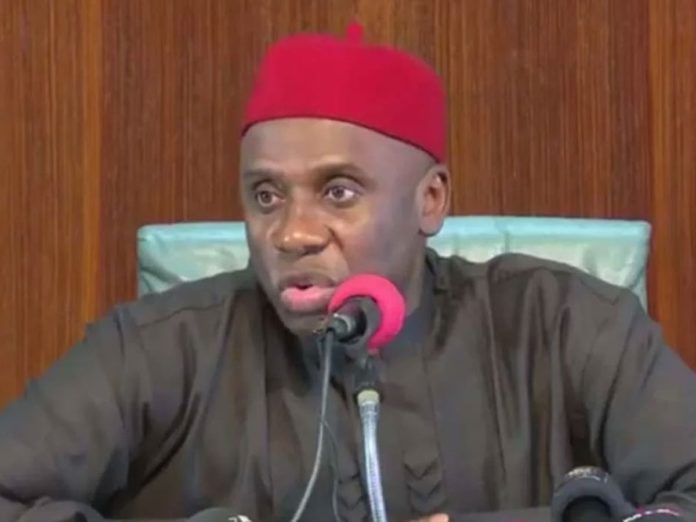 Mr. Rotimi Chibuike Amaechi, who is Nigeria’s current Minister of Transportation, has revealed that President Muhammadu Buhari will on march 9 perform the groundbreaking ceremony for the Eastern rail corridor of the country’s ongoing railway modernization.
Ameachi disclosed this during his inspection of all the stations from Mobolaji Johnson Station at Ebuta Metta to Ibadan station.
The minister, in a statement on Sunday in Abuja by the Director of Press of the ministry, Mr. Eric Ejiekwe, noted that the president has also approved the redirecting of the Eastern line to two new spurs namely Abakaliki, Ebonyi State and Awka, Anambra State.
Similarly, the minister stated that the federal government has approved the commencement of the Port Harcourt – Kano rail project and is also negotiating loans for the Lagos – Calabar rail project.
On the takeoff of the Ibadan-Kano rail project, Amaechi stated that the government is still seeking approval for a loan to enable its takeoff.
Speaking on the Lagos-Ibadan rail project, Amaechi said that he has challenged Messrs China Civil Engineering and Construction Company (CCECC) to deploy globally acceptable safety and security standards for the project.
He directed that a central cooling system be installed in all the major train stations along the route.
In a separate development, the minister has instructed the Nigerian Ports Authority (NPA) to punish truckers who flout directives.
Read Also: Why I Can’t Speak On Herdsmen Crisis – Chibuike Amaechi
Amaechi, while charging the NPA, urged it to punish truckers who fail to comply with the government’s directives when the rail end of the Apapa Port Spur line is completed
He added that President Buhari has issued a directive on the tonnage of cargo that should be allowed on roads and the directive will be complied with.
According to him, the directive has not been implemented as there are no viable alternatives yet to what subsists.
The statement further said that during the inspection, the minister took the train to the completed southward 8.72 km of the Apapa Port Spur Line end of the Lagos-Ibadan rail line, where he expressed displeasure at the outrageous number of trucks parked on the rail tracks, making work difficult to complete.
The minister, therefore, directed the management of the NPA to ensure that the trucks are moved out, adding that only registered trucks moving goods imported or to be exported would be allowed into the ports.