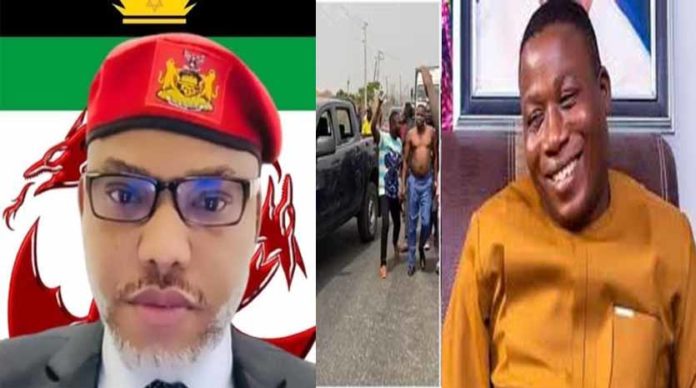 The leader of the Indigenous People of Biafra (IPOB), Nnamdi Kanu, has condemned the alleged attempt by security operatives to arrest Yoruba freedom fighter, Sunday Adeyemo aka Sunday Igboho warning that any attempt to arrest the freedom fighter would backfire.

Some media agencies had yesterday reported that some security operatives attempted to arrest Igboho at Guru Maharaji bus stop on the Lagos-Ibadan expressway.

Reacting to the development, Nnamdi Kanu on his Twitter handle, warned that Sunday Igboho should not be arrested.

‘I condemn in totality the pathetic attempt to arrest Sunday Igboho earlier today.

‘This is yet another deliberate act of provocation by the Fulani Caliphate. No #Fulani mass murderer, Miyetti Allah or bandit is under arrest. Nigeria is on the brink! Igboho should not be touched,‘ he warned.