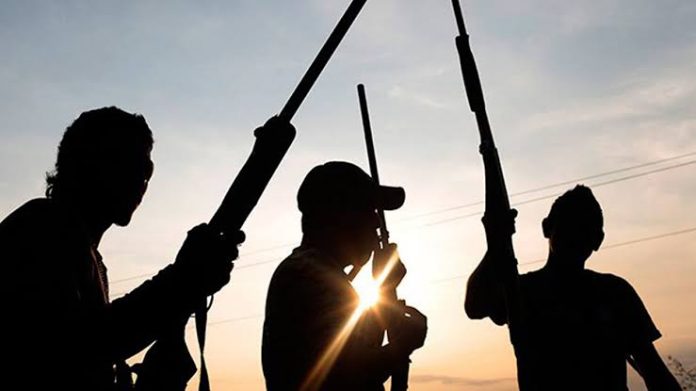 An indigene of Akata in Oru-east Local Government Area of Imo State, Mr. Obiezu, has been shot dead by kidnappers who invaded Orlu Catholic church on Wednesday.

The kidnappers, according to reports, were after Chief Valentino Ibenye, a philanthropist and an illustrious son of Okporo community in Orlu LGA.

The Eastern Updates gathered that the kidnappers, after a failed attempt to whisk away the moneybag, ran into their victim, Mr. Obiezu, and shot him dead.

Chief Valentino Ibenye who narrated his ordeal, said that the bandits traced him to St. Joseph’s Catholic Church, Okporo where he honoured a friend’s invitation for his father’s memorial service and that of the church harvest.

‘I drove alongside my sister’s daughter but when I made for the church gate and rode to the car park, I noticed some boys on a motorcycles entering the gate.’

‘Suddenly, four other motorcycles came towards the car park instead of the space designated for motorbikes.’

‘One of them jumped down and pointed a gun at me and ordered me to quietly follow them or they would shoot at me.’

‘It was then I realized they were kidnappers. I tried to attract attention but no one came to my rescue.’

‘When I refused to follow them, they pounced on me, tore my clothes and hit the gun repeatedly on my head.’

‘They made away with my two phones, wrist watch, necklace and cash of N1,150,000 and eight hundred and fifty dollars ($850). After much beating, I managed to enter the church’s auditorium and they followed me for more than an hour. It was when they noticed the police had been alerted that they ran away,’ he narrated.

Further reports said that the Accountant General’s brother who was driving in a Toyota hilux car, collided with the kidnappers on the road who shot him dead.