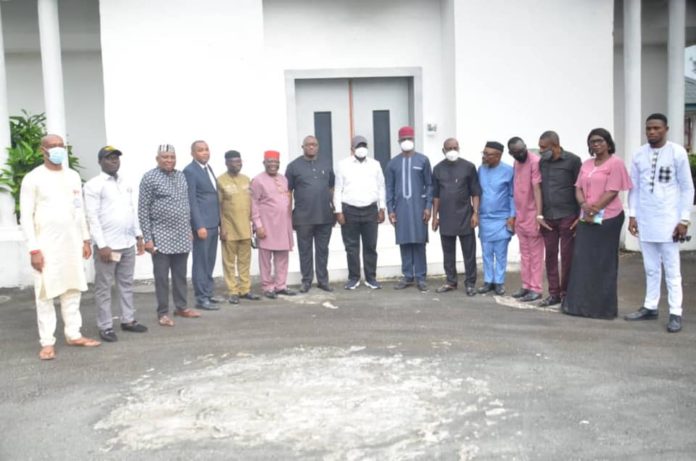 Governor Okezie Ikpeazu of Abia State has officially inaugurated a 12-man committee to ascertain the level of damage to private and public infrastructure arising from the recent protests by Nigerian youths in the State.

Speaking during the inauguration at Government House, Umuahia, the Governor urged the committee to find out the root causes of the destruction of public and private infrastructure in the State during the EndSARS protest, to list public and private properties destroyed or vandalized during the protest, to evaluate financial losses arising from the said destruction as well as device possible ways of averting future occurrences.

The Governor equally urged the committee to make recommendations on how the destroyed properties can be rebuilt within the shortest possible time and to do everything necessary or incidental to the actualisation of the mandate.

He also charged the committee members to explore ways through which to engage the youths in a constructive manner, adding that he is embarking on another local government elections in the State to underscore the importance of youth inclusion in Governance.

Ikpeazu explained that elections at the council levels provide opportunities for youths to participate as officials either as elected persons or appointees and urged Abia youths to submit proposals on their choice of businesses for sponsorship by the state government.

According to him, his administration has done a lot to provide job opportunities for the youths in the State including changing the narratives in entrepreneurship in Aba and Abia as a whole, and ongoing efforts in establishing automated shoe factory in the State, all targeted at the youths.

Speaking on behalf of his colleagues, chairman of the committee, Chief Chimaobi Ebisike thanked the Governor for the opportunity to serve the State through the assignment, and promised ‘to meet up with the expectations of government and the good people of Abia.’

Also, the Deputy Governor of the State, Sir Ude Oko Chukwu was present at the inauguration.