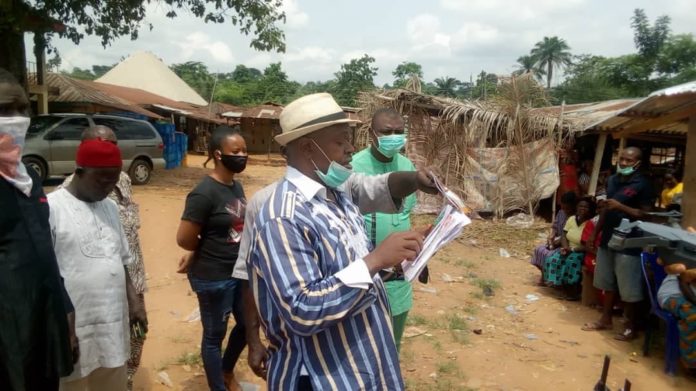 Months after Governor Ifeanyi Ugwuanyi’s intervention brought to an end the age-long crisis between Oruku and her Umuode neighbours, another round of tension appears to be brewing in the former.

This time, the Traditional Ruler of Oruku Community in Nkanu East council area of Enugu State, Igwe Emmanuel Mbah, is having it tough against a serving Nigerian Army officer, Major Raphael Okenwa, his Uncle, a retired Federal Permanent Secretary, Chief Raymond Okenwa, one Moses Nnamani, and others.

The monarch accused the army officer and others of unnecessarily stoking tension in the area, as well as carrying out a campaign of calumny against his person.

He warned them to desist forthwith from such wicked act, or meet him in court.

Mbah said his only sin against the said persons is his emergence as the monarch of the area, and his disposition towards probing how the past leadership of the area allegedly used the community’s commonwealth to enrich themselves.

DAILY POST reports that before the recent peace that was brokered by Governor Ugwuanyi-led administration, Oruku and neighbouring Omuode communities, had engaged each other in bloody communal war that lasted for over 27 years.

A document issued by some indigenes of the area, who preferred to be addressed as “Concerned citizens of Oruku Community”, as well as a petition by the monarch’s lawyer, Goodwin Onwusi (Esq), made available to newsmen in Enugu weekend, condemned the alleged campaign of calumny against the royal father in its entirety.

“The Video clips and its accompanied story being circulated recently in the social media to tarnish the image of the Igwe is not unconnected with the upshot from the amicable resolution of the dispute between Oruku and Omuode Communities,” the subjects stated.

The people explained that several past administrations were unable to settle the dispute but the current government succeeded.

“The leadership of both communities embraced peace, they came to a compromise in sharing the community lands, 70% and 30% for Oruku and Umuode respectively, and a memorandum of understand to that effect was signed by both community leaders”, they said.

According to them, in an effort to enthrone and sustain everlasting peace, the State government dissolved the Oruku Town union Executive, inaugurated a six-man Caretaker Committee to Superintend over the Community’s affairs for six months, adding that at the expiration of the Committee’s tenure, the Town union Executive and a new Traditional ruler, for the Community, Igwe Emmanuel Mbah, were democratically elected on 26th of December 2019.

They alleged since after the election, some of the contestants and their sponsors, including a former Head of Service in Enugu State, and a retired federal Permanent Secretary, Chief Raymond Okenwa, who is an uncle to Major Okenwa, have continued to resist moves by the traditional ruler to sanitise the corrupt system in the community.

The document added that: “on assumption of office, the new leadership was taken aback, on the alarming manner members of the past leadership allegedly fed fat on the Community’s funds, including how they withdrew the sum of 35Million Naira within a month from its account which was uncovered through a First bank statement of account printout.

“The past exco allotted various numbers of community plots of lands to themselves and their stooges, with a serving Major in the Nigeria Army, Raphael Okenwa, having over 50 plots of land, including others who acquired huge numbers illegally to the detriment of the locality.”

They said when the monarch and the new Town union leadership invited him for clarification, he refused to honour the invitation.

Meanwhile, in a 3-page petition filed on behalf of the monarch by his lawyer, Godwin Onwusi, (Esq) addressed to the Brigade Commander 4, Brigade, Nigerian Army, Benin city Edo State, where the officer is currently serving, the traditional ruler posited that the officer is out to tarnish his hard-earned reputation and image.

The petition dated 7th, September, 2020, and made available to our correspondent by the traditional ruler’s counsel, alleged that “Major Okenwa, and his cohorts, which include Moses Oko, Chidi Gabriel Nwatu, (Alias) Gabriel Prince and Onyedika Obinna have embarked on online campaigns of calumny to malign and defame our client.

“That sometimes in the past, when the traditional rulership stool of the Community became vacant, our client indicated interest to ascend the throne, but did not have the support of Major Raphael Okenwa, along with his Uncle, Chief Raymond Okenwa, a former Head of Service in Enugu state and retired permanent Secretary.

“Eventually, our client triumphed and became the recognized and certificated traditional ruler of Oruku Community by the Enugu state government, and “ever since Igwe Mbah, ascended the throne, “Major Okenwa, and his cohorts have continued to tarnish his image as well as blackmail him through the internet in various social media platforms.

“Major Raphael Okenwa, using his online name, “Visual Storyteller”, has continued to concoct false and malicious stories against our client both on his Facebook account and in his contributions to the WhatsApp platform of the indigenous people of Oruku Jiaba.”

The petition, therefore, asked the 4 Brigade Commander to reprimand Major Okenwa, and direct him to stop further concocting and sharing of information defamatory to “our client, as such actions from him rub- off negatively on the image of the Nigerian Army, as well as contravene Section 24 (b), of Cybercrime (prohibition, prevention etc) act, 2015.

“Against the backdrop, of the above, we humbly submit thus: that the actions of Major Okenwa, are defamatory of our client, as they are injurious to his reputation, lower him in the estimation of right-thinking members of the public. And equally expose him to hatred, contempt or ridicule.”

It also claimed that “the motivation behind Major Okenwa’s actions is to discredit our client before the Enugu state government with a view to making it withdraw his Certificate of recognition so that his preferred candidate can be enthroned as the Igwe of Oruku Community.”

The petitioner equally noted that as a serving Major in the Nigerian Army, with strict military discipline and law, the officer in question is not supposed to dabble into local Chieftaincy title issues, “or to defame our dear client, so as to create way for his preferred candidate.

“We also respectfully urge you to, in strict compliance with military discipline, mandate Major Okenwa to publish an apology to our client.”

When contacted, Chief Okenwa, dismissed the allegations against him by the traditional ruler.

He said, “I am sorry for him, because he is a drowning man looking for what to hold unto.

“Although, I wouldn’t want to join issues with him, he knows what to do, let him go to court. But I think he should better go and face the charges facing him.”

Effort to reach the other members of the community was unsuccessful as of the time of filling this report.