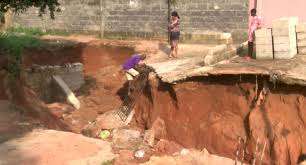 Scores of residents were, on Monday, trapped in an Imo State community following a landslide that occurred in the area.

The landslide, which occurred on Saturday on Trinity Street, Akwakuma, in the Owerri North Local Government Area of the state, also cut off more than six buildings, thereby trapping the occupants.

One of the victims and a lecturer in the Department of Mass Communication, Federal Polytechnic, Nekede, Owerri, Emma Ogu, said for three days now, his family and many other residents of the area had been trapped in their houses.

It was gathered that two major churches, St. Philip Anglican Church, Akwakuma, and the Holy Trinity Catholic Church were also affected as well as residential and commercial structures.

Reacting, the Commissioner for Environment, Dr Ike Njoku, said officials of the ministry had visited the area.

He advised residents of the area to always monitor the level of water flow in the area.

‘It is a big problem for the state. This is because there are more than 300 erosion sites in Imo. Meanwhile, we have taken the matter to the state government, which has slated the area as one of those areas that required urgent attention,’ the commissioner stated.