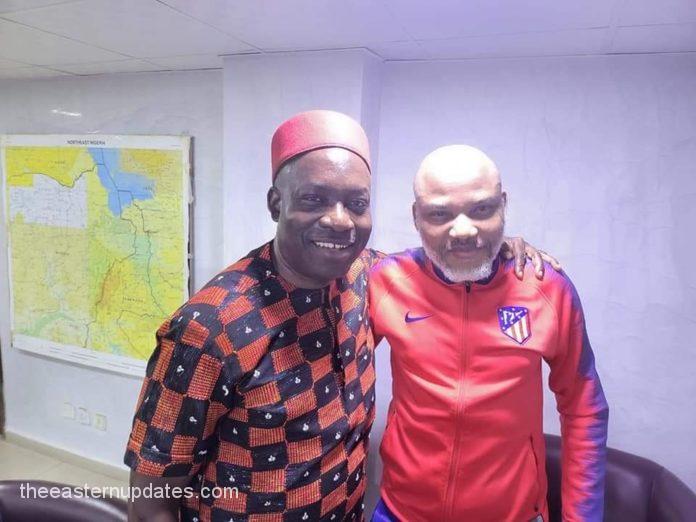 A family member of Nnamdi Kanu, leader of the Indigenous People of Biafra, IPOB, has reacted to Governor Chukwuma Soludo’s visit to the agitator.

Kanu’s younger brother, Prince Emmanuel stated that Soludo’s visit was an indication that the IPOB leader was not a bad person as being portrayed by the Federal Government of Nigeria.

Soludo had visited Kanu in the custody of the Department of State Services, DSS, last week Friday.

The Governor disclosed this on his social media handles, stressing that the IPOB leader was against the killings in the South-East.

Emmanuel described Soludo’s visit to Kanu in DSS detention as remarkable and a good move.

He also applauded the Governor and all those making genuine efforts towards ensuring Kanu’s release.

‘It was a good move and a very remarkable one. It shows that Kanu is not a bad man as being portrayed by the authorities.

‘We thank the Governor for deeming it fit to visit Kanu in detention. It’s a good step expected of a good leader.

‘We thank everyone making frantic effort openly or privately to secure his release. All hands must be on deck until freedom is achieved’, he told reporters.

Meanwhile, the Indigenous People of Biafra (IPOB) has declared 18th and 26th of May a sit-at-home in solidarity with its leader, Nnamdi Kanu’s days of appearance in court in defence of his charges which the Federal Government has slammed against him.

In a related development, IPOB clarified it is aware of a viral voice note warning people of the southeast to remain indoors from May,16 to 20th in respect of the same court outing of Kanu.

A statement by the media and publicity secretary of the group, Emma Powerful which was made available to The Eastern Updates has urged the people to disregard the Monday to Friday sit-at-home order maintaining that it did not emanate from them.

Powerful noted that the counter order is a calculated effort to create confusion in the southeast, thereby scuttling their struggle for liberation.