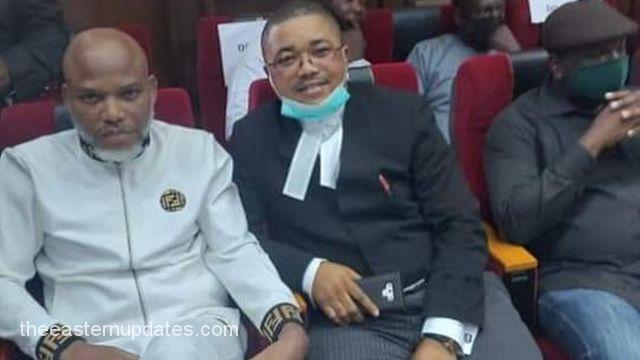 The Coalition of South East Youth Leaders (COSEYL) which is a sociopolitical group has openly decried and criticised those killing and burning down valuable properties in the Southeast region while reiterating that their actions were indirectly jeopardising the chances of getting the leader of the Indigenous People of Biafra (IPOB) Nnamdi Kanu freed.

The group made these observations in a statement signed by its President-General, Hon. Goodluck Ibem, who reacted to the burning of Idemili North Council Secretariat and Magistrate Court.

It described the latest incidents as barbaric and an act of wickedness.

The Eastern Updates can recall that the Secretariat and Magistrate Court in Idemili North of Anambra State were burnt down on Sunday night.

Read Also: What Kanu Told Me When I Visited Him In Detention – Soludo

According to Ibem, “while some religious extremists are busy destroying the properties and goods of Igbos in Sokoto and Yobe States in the Northern part of the country, another set of criminals are on our doorstep burning down government property in Igboland.

“This smacks of a conspiracy to scuttle the progress, security and development of Ndigbo.”

The attack on Idemili North came barely 24 hours after Governor Charles Soludo paid a visit to the IPOB leader, Nnamdi Kanu at DSS custody in Abuja, where Kanu confirmed that the hoodlums were not on the same page with IPOB.

Kanu had also told Soludo that he would preach peace upon getting his freedom.

The Anambra State Governor, since his assumption of office, has been having a hectic time trying to restore peace in the state, including exploring avenues to get Nnamdi Kanu freed.

But the group said, “the burning and destruction of Idemili North Secretariat and the Magistrate Court in Ogidi barely 24 hours after the Governor visited Mazi Kanu at DSS custody confirms our earlier stance that those behind the attacks, killings and burning of government properties and institutions in Anambra State are elements opposed to the release of Mazi Nnamdi Kanu and the progress of Igboland.

“These elements are making huge profits from the incarceration of Kanu and his release will scuttle their illicit business hence the attack on Anambra State Government properties, just in a bid to discourage the Governor of the State from his legitimate pursuit that will bring lasting peace to the South-East zone.

“The truth is that the incarceration of Nnamdi Kanu brought to South East high level of insecurity to a once very peaceful region and only his release will douse the tension and restore peace and tranquility to the region. Those opposed to Kanu’s release are enemies of Ndigbo and are the architects of the current insecurity that is ravaging the zone”.