I Have No Regrets Waging War Against IPOB in Rivers – Wike 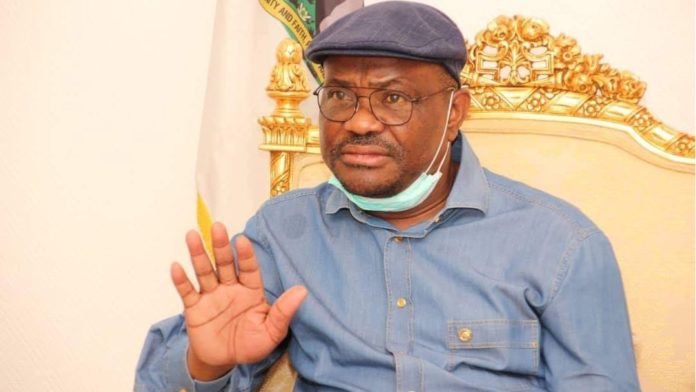 Rivers State Governor, Chief Nyesom Wike has explained that the ongoing operations by security agencies in Oyibo Local Government Area of the state were against members of the disbanded terrorist group, Indigenous People of Biafra (IPOB) and not the Igbos.

The governor, who said he had no regrets waging war against IPOB, insisted that he did not order the soldiers or the police to kill Igbos living in Rivers State, describing such allegation as balderdash.

Wike, who spoke in a live television interview in Port Harcourt, described the activities of IPOB as unfortunate lamenting that the disbanded group had tried many times to use Oyibo as a base for their illegal operations.

The governor said the #EndSARS protest was going on peacefully until IPOB members hijacked it and unleashed unimaginable violence and destruction of properties.

He insisted that his government would not allow IPOB to realise its wish of taking over any part of Rivers and blasted some persons for sponsoring propaganda that he ordered the military to kill the Igbos in the state.

He said: ‘Going to the issue of Oyibo, it is unfortunate. I have done my research; it is easy for Nigerians to forget. This is not the first time IPOB has used Oyibo as a launching ground, security is aware, IPOB has been doing that. How could it have been #EndSAR movement?

‘Now anybody who knows me very well, know I speak my mind every time. The country knows that if there is one man that is not liked by the military, it is me because I will speak my mind against them.

‘I don’t know when I become a friend now to order the military to go to Oyibo to start killing people. It is very funny. That is why I said that somebody trying to sponsor propaganda against me that I am killing the Igbos and I laugh.

‘You see the same people who had praised me one time or the other that if there is any governor, they believe it’s me. Today now they say I have sent out the military to kill, and I ask when did I become the friend of SARS? From the highest rank, I don’t know who likes me. That does not mean I should not say the truth.’

The governor wondered why IPOB would cause havoc in the state denouncing members of IPOB for attempting to claim and rename communities and local government in the state.

Wike said: ‘Why will IPOB use a local government to begin to launch attack not only on properties but on innocent Nigerians and the security operatives. Rivers State was peaceful, IPOB woke up in the morning that they were doing EndSARS protest kill six Army operatives and burnt one. Killed four police officers, destroyed all the police stations in Oyibo. Burnt down all the courts.

‘I don’t need to call the army. I don’t have a relationship and I don’t have the powers. I have no access. Even when the former GOC was here he never saw me one day till the day he left here.

‘IPOB tried to rename communities through their so-called leader Nnamdi Kanu when I am governor here. They start to change the names of communities and local government in my own state when I am governor. They went there to hoist flags there like Boko Haram in the North-East, and you said we should allow that.

‘They went to a school in Kom-Kom a school we built and hoisted IPOB flag there. It is in the cause of this whole thing we started finding out. You cannot say as a sitting governor, a body that has been proscribed by the court, by law and which you have not set it aside or appealed against it, and FG has said the body is a terrorist organisation than as a governor because of politics I will sit down. I won’t allow that. People saying, I sent the military to Oyibo to start killing Ibo people, it is balderdash.

‘I have no relationship with the army or the police, I do not command them. They change the commissioner of police every time. How will I begin to direct army that I do not give instruction?

‘Like I told you, Oyibo is the boundary between us and Abia State. It is easy for them to penetrate Oyibo and then launch attack. I am saying that what has happened is something that we should not take lightly.

‘Now we must come out heavily against this terrorist organisation. I have no regrets about that. Even the South-East Governors never supported IPOB. If me I am not from the South-East, I am from the Niger Delta, why will I support IPOB, on what bases?’

The governor added that it was wrong for some persons to see IPOB as a mouthpiece of the Igbos, adding that no right-thinking group or person would take a criminal organisation seriously.

Wike emphasised that he did not hate Igbo people, adding that the state had always enjoyed a good relationship with the people of the South-East.

He said: ‘People now see IPOB as if they are the mouthpiece of the Igbo people, which is not correct. You cannot allow some gang of criminals to give people a bad name. You don’t allow that, who is IPOB, what do they represent? I can’t change my identity for whatever reason. Rivers State is a peaceful state, it is a state everybody would want to come and stay.

‘It snowballed into attacking the Hausa community. It is not all Ibos that have the idea of this IPOB. It came to a point the Igbos were fighting around Rumuokurusi, Oil Mill area, I have to impose curfew in that section after a security meeting, to say look there is going to be curfew there so that nobody comes out and begin to go about killing people. I cannot sit as governor and watch people give me problems.

‘The destruction in Oyibo today government has made a commitment. In fact, today, the governor is going to give the families of those who died their money as promised, now such money would it not have gone for other issues. We have asked police to quantify their property that has been destroyed so that we rebuild the police stations, that is going to cost us money.

‘With due respect, how would I hate Igbos on what bases? There is no way. It is unthinkable, it is impossible. We have lived with Igbos all our lives as Eastern regions and we related very well. We have done everything together. I will not fold my arms and watch criminals destroy my state; if those few criminals are Igbos then they should know that I will not allow them.

‘They made attempt to rename a local government in my state. That alone is a signal. I will not agree to that. They are criminals, who want to destroy Igbo land. Even the governors of South-east have denounced them. If that is the case why will I allow them to operate here?

‘This organisation has made us spend money where we are not supposed to spend money. Those monies would have been used for other purposes. We cannot wait for the federal government. Who will replace those vehicles burnt? We have to do it for them to protect the lives and property of Rivers State people?

‘Why will I kill the Igbos in Oyibo and will not kill the Igbos in Port Harcourt and Obio/Akpor Local Government, does it make sense? We cannot allow a gang of criminals to begin to speak for our people. Nobody allows that because when once you allow that the government is gone.’

Wike also said the curfew imposed in Oyibo was in the interest of the people and urged the residents to endure the challenges caused by the restrictions.

He said: ‘If there is any government that should have an advantage it is Oyibo Local Government. But the truth of the matter is this IPOB has used this local government. And we say now you must have to leave the area and don’t cause a crisis for the people of Oyibo. IPOB can’t continue to be there and cause a problem for the people.

‘Why will you chase Igbos away? They have been there. There are many of them that were born there, how would you chase them away?

‘The security agencies got there and in people’s house, they saw shrines with IPOB flags and Nnamdi Kanu’s picture. It is so terrible that if you continue to allow these boys to operate from there before you know it the state is gone. And not under my watch will I allow that. I will not allow that.

‘Like I said some of them are sending me messages from America and other countries that they will deal with me and I said I am not Ekwerenmadu that you will harass. I am not Amaechi. I dared them anybody who is an IPOB member that will see me. I am not that kind of governor. I will not look back on the street of Europe. Nobody can intimidate me on that.

‘Who are those who stopped it, it is the military? That is why I say we politicise the issues of security. They were to undergo training at the NYSC Camp a facility owned by federal government organisation, not the state. If we intend to do anything that is criminal or hidden would it be that place?

‘That is the reason I say this country since we politicise everything, we are going nowhere. The day they were to be trained army chased them away from that we were using them for politics, meanwhile, other states have their own security outfits.

‘Neighbourhood is just part of intelligence for the security agencies, but for Rivers State federal government took it that I was to use it for election. The allowed it in other states.’