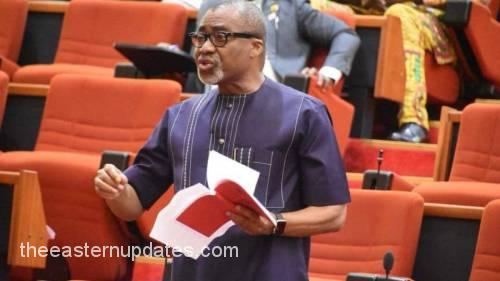 Enyinnaya Abaribe who is the Senate Minority Leader and Senator representing Abia South Senatorial District will on Wednesday quit as the ninth Senate’s minority leader thereby ending his political journey in that position.

Abaribe, who assumed minority leadership in 2019, was elected on the Peoples Democratic Party (PDP) platform but defected to the All Progressives Grand Alliance (APGA) due to an unresolved crisis while seeking the 2023 governorship ticket.

Though he was available on Tuesday for legislative activities after over a month’s recess where parliamentarians took time to participate in election primaries, he however didn’t announce his official resignation from the PDP.

The Eastern Updates gathered that he has since submitted his letter of resignation to the President of the Senate Dr Ahmad Ibrahim Lawan, but the letter was deferred for reading on Wednesday, after which Abaribe would resign and will be subsequently led to his new seat in the Red Chambers.

Lawan, however, further confirmed that the opposition leader has defected, saying the detail will be made known on Wednesday.

Before Lawan spoke on Abaribe, Senator Gabriel Suswam representing Benue North-East Senatorial District raised a point of order to draw the attention of the chamber to the status of Abaribe.

Other members who defected from the ruling All Progressives Congress (APC) to the PDP are Senate Majority Leader, Yahaya Abdullahi, and Adamu Aliero.

After it adjourned sitting for six-weeks to enable members participate in the just concluded primaries to pick candidates ahead of 2023 general and Presidential elections, the Senate yesterday resumed in what could be described as the seemingly solemn and glum plenary session as the hallowed chamber was scanty.

The chamber had suspended plenary on Wednesday, May 11, 2022, to enable lawmakers to participate in the primaries of political parties.

At the resumed plenary, the  President of the Senate, Senator Ahmad Lawan announced to his colleagues the resignation of the Majority Leader, Senator Yahaya Abdullahi, Kebbi North and the Minority Leader, Senator Enyinnaya Abaribe, Abia South, adding that their resignation followed their defection from their political parties under which platform they got elected into the Senate.

The atmosphere at the Senate Chamber was solemn against the backdrop that n0 fewer than 70 per cent of the senators lost their bid to return to the red chamber on the platform of their parties, just as some of them dumped their parties for new ones.

In a letter he read, the President of the Senate said that  Abdullahi’s resignation was attributed to  his decision to his defection from the All Progressives Congress,  to the Peoples Democratic Party, PDP

Lawan also said that Abaribe dumped  the PDP for the  All Progressives Grand Alliance, APGA.