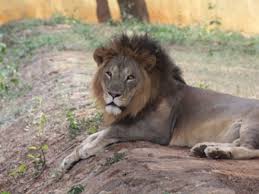 Imo Government on Wednesday announced that it has given out its three Lions to a philanthropist Innocent Onwubiko for adoption.
The State government and the philanthropist had earlier signed a Memorandum of Understanding (MoU) for the adoption of the Three Lions which is expected to terminate after one year according to the terms of the agreement.
Giving reason for the adoption, Onwubiko told journalists on Wednesday that he had decided to adopt the animals to support wildlife conservation in the state and  Nigeria.
Read Also: Imo Government Recovers Looted State Properties
He said he would cater for the welfare of the three Lions until the expiration of their MoU.
‘I want to support Imo government to sustain the life of the Lions because to feed a Lion is very expensive.
‘I am a lover of nature and this is one of the ways Onwubiko Foundation will show love to animals and promote wildlife conservation in the country’, he said.
Onwubiko commended the Imo government for approving the adoption of the wild species, admonished the government to upgrade the  Owerri Zoological garden and wildlife park  to an international standard.
The General Manager of Imo Zoological Garden and Wildlife Park Mr. Francis Abioye commended Onwubiko for showing interest in wildlife preservation.