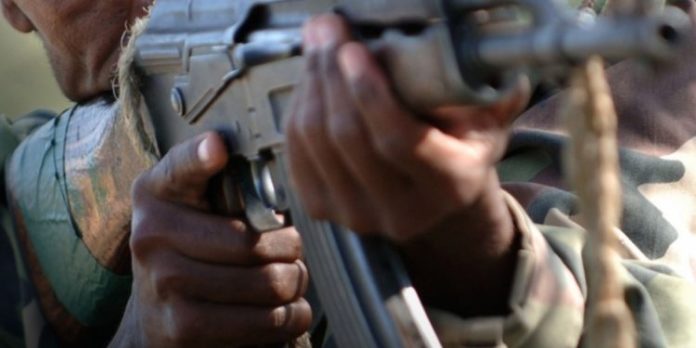 Unknown gunmen numbering about 5 yesterday attacked Ogboro-Eke-Abugu village Ibagwa-Ani in Nsukka Local Government Area of Enugu state, killed one, and injured two people.
An eyewitness who pleaded anonymity told correspondents in Nsukka on Wednesday that the gunmen stormed the village around 9 pm Tuesday night and shot one James Ugwu dead, shot his wife on the leg, and another person on the stomach.
‘the sound of gunshot and crying by members of Ugwu’s family attracted neighbors and other villagers.
‘before we rushed to the scene the gunmen have escaped through the bush, they are up to five in number.

Read Also: Unknown Gunmen: Those Who Kill by Gun Shall Die by Gun – Mbaka

‘Ugwu has been deposited a mortuary in Nsukka town, while his wife and Ejike Ugwuanyi was shot on the leg and stomach respectively have been rushed to hospital in Enugu,’ he said.
Dr Emma Ugwuerua who is from Ibagwa-ani and also the representative of Nsukka-West constituency in Enugu State House of Assembly confirmed the incident but declined to give more details.
He said; ‘Yes there was an attack by unknown gunmen on Ibagwa-ani on Tuesday night but I can’t give more details because we are already in a meeting over the issue,’ he said.
Also, the Nsukka Police Area commander Mr. Yahaya Hassan said that they are aware of the incident.
‘Yes I am aware of the attack by the unknown gunmen, I have visited the area and have sent my men who were already on the ground to beef up security in the area’, he said.
Confirming the attack, the Enugu State Police Public Relations Officer Mr. Daniel Ndukwu said “We got a report that on 13/4/21 at about 2315hrs, yet to be identified armed men attacked and killed one James Ugwu in Ibagwa-Ani Nsukka, while his wife and one other were injured.
‘The State Commissioner of Police, Mohammed Aliyu has directed the SCID to launch a full-scale investigation to unravel the mystery behind the attack, arrest, and bring the perpetrators to book.
‘He pleads with people of the community to remain calm, assist the Police in the investigation and avoid doing anything capable of breaching public peace of the area,‘ he said.
THE EASTERN UPDATES
Facebook
Twitter
WhatsApp
Email
Telegram
Previous articleFUTO Gets First Female Vice Chancellor
Next articlePhilanthropist Adopts 3 Lions From Imo Zoo