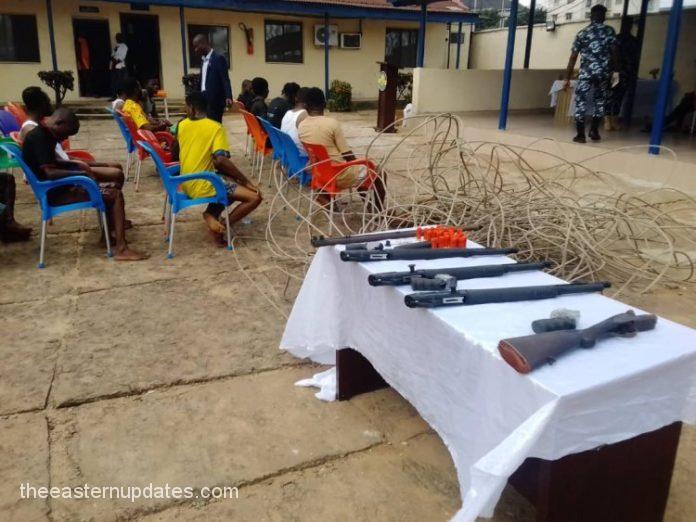 Mr. Echeng Echeng who is the Commissioner of Police, Anambra State yesterday paraded no fewer than 20 suspects arrested in connection with various crimes in the state.

The Eastern Updates gathered that among the suspects were three men, Nwobodo Obumneme, Malachi Uzorchukwu  and Ifesinachi Ogechukwu,  said to have been arrested in connection with the killing of an official of the Independent National Electoral Commission in the state, Mr Osita Duruoha.

The 26-year-old Obumneme told journalists that the gang strangled Duruoha with the aim of dispossessing him of his shuttle bus.

Duruoha, before his death, was declared missing in September, but his body was later found by the roadside, in the Isuaniocha community in Awka North Local Government Area of the state.

Confessing to the crime, Obumneme said, “We hired him to use his shuttle bus to take us to Urum from Ifite; our intention was to steal his bus, but later we had to strangle him to take the bus.”

Also paraded was one Ekenedilichukwu Okeke, who told journalists that he killed his stepmother, Theresa Okeke, for refusing to give him N1m for school fees.

The fifty-four-year-old Okeke, who worked as an accountant with the National Population Commission in Awka, was killed on September 28, 2022 by a gang of hoodlums, who invaded her house.

The suspect said, ‘I had a problem with my stepmother.  I wanted her to give me N1m but she refused. After  I pleaded with her, she agreed to give me the money but she later changed her mind. So, I had to arrange with some of my friends to help me extract the money from her. They came at night and tied her hands and legs in order to force her to give me the money. But in the process, she stopped talking and before we knew it, she was dead.’

Telling his side of the story, one of Ekenedilichukwu’s  suspected accomplices, said,  ‘Ekenedilichukwu called me that I should help him extract N1m from his stepmother to enable him to pay his school fees in the university.

‘When we got to his stepmother’s house at about 2am, one of the guys tied the woman’s hands and legs and when she wanted to shout, I personally covered her mouth and I called the other man to bring something to tie her mouth. After tying her mouth, she stopped breathing and we had to rush out.’

He added that they could not get any money from the woman before she died as she did not give them her bank details.

While briefing journalists, the Commissioner of Police, Echeng, said suspects would be charged  to court.

The CP said the command in collaboration with vigilantes in the state also arrested four suspected electricity equipment vandals and thieves.

He called on criminal elements in the state to leave, vowing that they would be hunted down.

The police boss urged citizens to  continue to go about their lawful businesses and give prompt information about criminal activities within their domain to law enforcement agencies for  appropriate action.