How Suspected Food Poisoning Killed Family Of 6 In Anambra 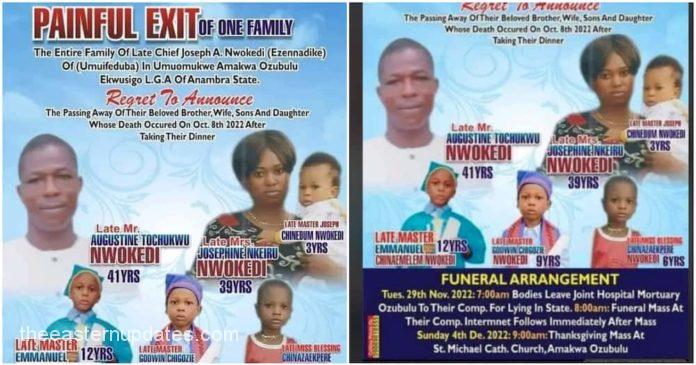 A man whose name has been given as Augustine Nwokedi, his wife, Josephine, and four children, have died of suspected food poisoning at their residence in Ozubulu community, Anambra State.

The Eastern Updates gathered that the victim’s neighbours, who observed that none of them came out of their apartment, broke into the house and found their corpses.

A source in the community disclosed that the victims died after the family had taken their dinner and gone to bed.

According to the source, the family were suspected to have died of food poisoning, but this has not been confirmed.

The source also said the victims’ burial had been slated for November 29, 2022. Contacted, the state Police Public Relations Officer, DSP Tochukwu Ikenga, said he had yet to be briefed about the incident.

‘There is no such report before me please, but we advise the family members of the deceased to make an official report.’

However, a community leader, who craved anonymity, described the victims’ death as shocking to members of the community.

The community leader said, ‘The community has started making the necessary arrangements for the burial of the deceased victims.

‘The incident is still a shock to us; it is a taboo in the community for anyone to kill somebody through poisoning and the community has placed curses on anyone who committed such dastardly act.

‘Right now, the President-General of the community travelled and the community does not have a monarch yet, it is when the PG returns that we will meet to take a position on the matter.’

The Eastern Updates reports that the report has continued to generate reactions on social media.