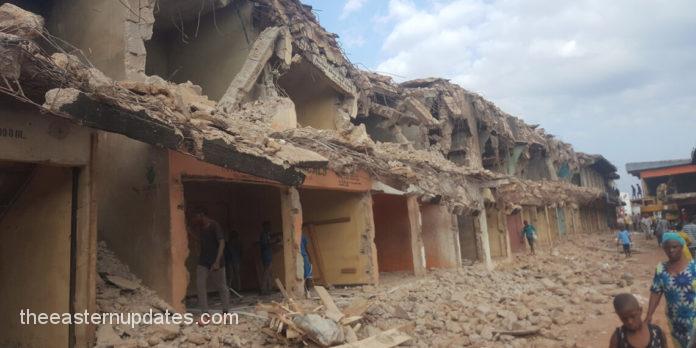 The Enugu State Government kept to its earlier promise as it carried out the demolishing of the Kenyatta Building Materials Market in Uwani-Enugu, Enugu South Local Government Area of the state.

The demolition had been carried out by the Enugu Capital Territory Development Authority (ECTDA) early in the morning when most of the traders had not opened their shops for the day.

The traders were said to have rebuffed directives by the government to relocate to their permanent site at Ugwuaji area of the state, even when some of their colleagues complied with the directive.

Several traders struggled to remove their goods from the shops, while others were busy loading their goods into waiting trucks during the demolition.

But those who could not immediately hire trucks, resorted to putting down their goods temporarily along minor roads and streets around the market.

The ECTDA chairman, Joseph Onoh, told reporters that the demolition was a development control measure with the aim of decongesting the capital city.

He said the growing population at the demolished market was affecting the development plan of the area. The traders were given adequate time to move to their permanent site, he said.

Mr Onoh said the area was originally allocated to the National Youth Council of Nigeria but was converted into a market by the traders.

“As far back as 2003, a site was obtained and designated as Enugu South International Market and the successive state administrations failed to relocate the traders to that site at Ugwuaji,” he said.

“On 6 January 2020, we came for enforcement and we moved a portion of the traders, but some said they didn’t have shops.

Some traders in the market, who spoke to Newsmen said the government took them unawares. They expressed surprise that the demolition was carried out despite a court injunction against it.

“They told us that they were coming, since last two years, and we were waiting for them to give us (exact) time, and suddenly they came today and started demolishing our shops,” said Mr Okonkwo, whose two shops were demolished.

Another shop owner, who accused the leadership of the market of sabotage, lamented that they have lost millions of naira due to the demolition.