2 Killed, Many Injured As Gunmen Attack Bullion Van In Abia 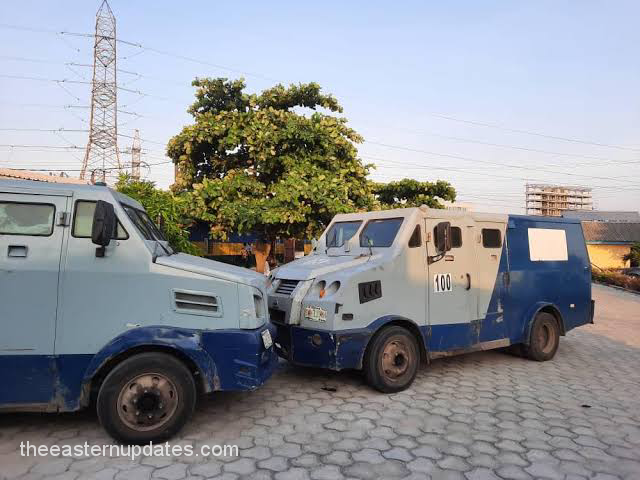 No fewer than two people, a staff of a new generation bank, as well as a suspected armed robber, were among the casualties yesterday when armed robbers attacked a bullion van conveying cash in Abia State.

The Abia command’s Police Public Relations Officer (PPRO), SP Geoffrey Ogbonna while confirming the incident, while parading the body of the neutralised hoodlum, revealed that the incident occurred at about 1313 hours at Ntigha Junction in Isiala Ngwa North Local Government Area (LGA) of the State, along the Port Harcourt-Enugu Expressway.

He disclosed that six mobile policemen attached to 28 PMF Umuahia and Counter Terrorist Unit Base 4, Aba, while escorting a bullion van conveying cash from a new generation commercial bank in Aba to Umuahia, suddenly ran into an ambush laid by the armed robbers. The armed robbers, he said, opened fire on sighting the bullion van, which forced its driver to swerve into the bush where the hoodlums rushed and shot dead the bank cash officer, while the driver escaped.

The PPRO said the escort team engaged the armed robbers in a shootout. During the ensuing gun duel, one of the hoodlums was neutralised and his AK 47 rifle with ammunition laden in three magazines strapped together was recovered. However, three of the escort men sustained gunshot injuries and were subsequently rushed to the hospital.

A police statement said: “Based on a distress call, teams of tactical operatives were dispatched to the scene. At the scene, one Inspector Leo Francis of CTU (Counter Terrorist Unit) Base 4 Aba, was met and he stated that he, along with five others, while escorting a bullion van from Ogukwu Street Aba to Umuahia ran into a gang of armed robbers who had barricaded the highway and were firing sporadically.

“Efforts made to stop the bullion van and escort vehicle yielded no dividend as the driver veered into the bush. The cash officer accompanying the bullion van was shot dead on the spot, three policemen on escort sustained bullet injuries, while one of the armed robbers was neutralised and his AK47 rifle with 90 rounds of ammunition was recovered.

“The injured policemen were rushed to the hospital, while the deceased were deposited in the morgue for preservation. Investigation has commenced.”

The robbers were said to have carted away an undisclosed sum of money. The police spokesman called on Abians to always volunteer information to the police for quick intervention. He also appealed to hospitals in the state to report anyone in their facilities with bullet wounds for investigation as some of the robbers fled with bullet injuries.