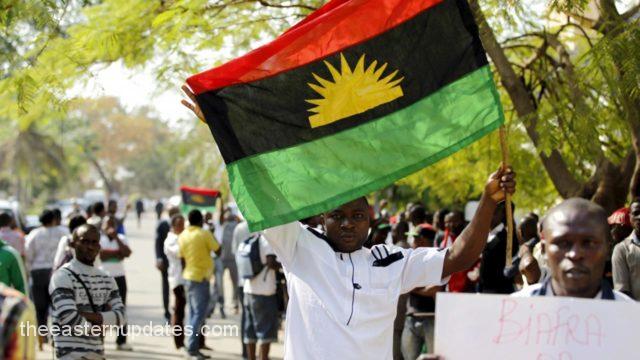 The Indigenous People of Biafra (IPOB), has sent a strong warning to Fulani herdsmen against any reprisal attacks on communities in Umunneochi Council area of Abia State, over the killing of cows grazing on farmlands.

IPOB in a statement by its Media and Publicity Secretary Emma Powerful, commended Eastern Security Network, ESN, operatives for the job which it said was aimed at protecting hapless farmers against wicked and criminal herdsmen.

The statement made available to Vanguard read: “IPOB and ESN are responsible for the killing of cows encroaching into people’s farm lands. We also warn the fulani terrorists not to venture attack any Community in the area as in their nature.

‘If they attack any Community, that means Fulani will no longer be allowed to do business again in that market.

‘IPOB advises all Fulani in a legitimate business to ensure they stay within the designated areas assigned for them in the market. They must not exceed the square meters and measurement given to them in that market. If they do, they will have scores to settle with IPOB.’

IPOB gave reasons for the killing of cows at Lokpanta, and vowed never to watch terrorists take over forests in Igbo land under the guise of cattle rearing while in reality their mission is to wreak havoc.

‘IPOB is not a terrorist movement; our focus is on peaceful Biafra Referendum for citizens of Biafra to decide their fate in the Nigeria project.

“We are after those terrorists masquerading as herdsmen kidnapping and destroying our people’s lives and farmlands in that area.

” We are not Fulani terrorists who used Boko Haram to terrorize Goodluck Ebere Jonathan out of office and force Buhari into the office.”

‘The terrorists masquerading as herdsmen in Lokpanta should know that ESN under IPOB is responsible for the recent decimation of cows that the terrorists are using as cover to kidnap, rape and destroy our people’s farmlands.

‘Therefore, if these terrorists attack any Community in that area they must prepare to leave that area and in fact entirely Biafra land. We are not interested in whatever their political leaders and their political collaborators in Igbo land are saying.

‘IPOB and ESN have a responsibility to keep our land safe for our indigenous people and lawful residents. We will not compromise on this obligation even when the compromised Nigeria Security have joined the agenda to forcibly take over our Land.

‘IPOB is the people and the people are IPOB and no one or tribe will take over our Land. Not today and not tomorrow.’

The pro-Biafra movement, again, denied any links with the presidential candidate of the Labour Party Mr Peter Obi, saying that there is no nexus between its agitation and Obi’s presidential ambition.

According to IPOB, those trying to associate the agitation with Biafran with Obi’s presidential project are suffering from what it called ” Igbophobia” ( unwarranted hatred for the Igbo).

‘Arewa groups mentioning Peter Obi’s name with the activities of IPOB shows that they suffering from what we called “Igbophobia”. Peter Obi belongs to the Nigerian elites his condemnation or silence on IPOB activities is none of our concerns.

‘Did Alhaji Atiku Abubakar condemn the gruesome murder of Deborah Yakubu in Sokoto State last two months? Instead, he encouraged Muslim fanatics who murdered and burnt the young lady in her school because she posted something that was not related to the Muslim family. Let it be crystal clear to Arewa group and whoever cares to listen that IPOB and Peter Obi with other Igbo politicians have parallel objectives and they have nothing to do with IPOB strategy and operations.’