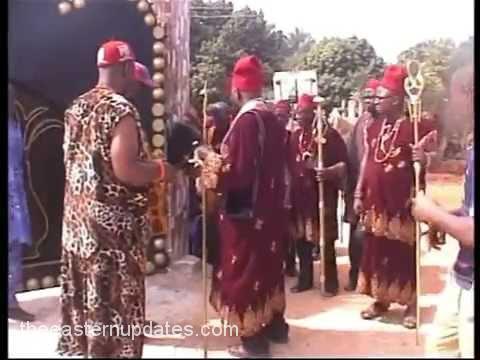 It was a joyous celebration as the people of Edem-Ani community in the Nsukka Local Government Area of Enugu State, have on Wednesday, unanimously elected a United States-based Nurse, Chief Samuel Asadu as their new traditional ruler.

The election, which had also taken place at the community’s Central School, had been supervised and monitored by a government team from state’s Ministry of Chieftaincy Affairs, led by its Commissioner, Chief Charles Egumgbe.

Chief Asadu, who is also a philanthropist, was elected unopposed with 715 votes amid cheers and jubilation. He will fill the vacuum created following the demise of the community’s former monarch, HRH Igwe Sunday Asogwa, who died a year ago.

Declaring Asadu winner, Mr Innocent Asogwa, chairman of the electoral committee, said that Asadu was the only contestant that indicated interest in the vacant position, and was massively and unanimously voted to be the next ‘Igwe’ of the community.

“Before we got to this point, the electoral committee had developed application forms for the stool of Igwe Edem-Ani, and public notice was widely published in all the 15 villages of the community,” he said.

“At the end of sales of forms exercise, only one candidate, one Chief Asadu purchased the form, paid required fee and complied with all the requirements spelt out in the form. He duly returned same within the stipulated time.

“Today, you all have demonstrated your trust on him to be the traditional ruler of our community by coming out in en masse and unanimously casting your votes for him.

“After the vote count, Chief Asadu scored 715 votes, having satisfied every other requirement, I hereby present him to you and accordingly returned him unopposed as the Igwe designate of Edem-Ani autonomous community,” Asogwa stated.

He promised that his reign would bring positive change, saying it was time to witness double progress, unity and peace in the community.