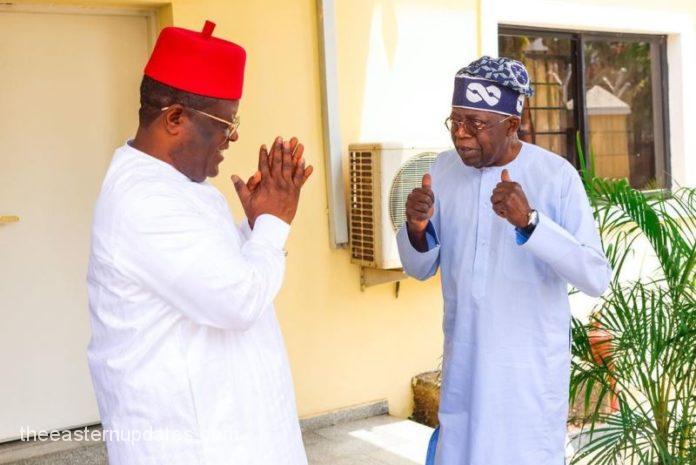 Chief David Umahi who is the Ebonyi State Governor has finally congratulated the presidential candidate of the ruling All Progressives Congress, APC, Asiwaju Bola Ahmed Tinubu for emerging victorious in the just concluded primary election of the party.

He sent in his congratulatory message on Thursday.

Umahi, who aspired for the seat of the President of Nigeria, lost to Tinubu who scored a total of 1271 votes to defeat his rival opponents.

In a statement signed and issued to journalists in Abakaliki, the Ebonyi State capital, Umahi vowed to mobilise support and give bulk votes that will ensure Tinubu’s victory in the forthcoming 2023 general election.

According to him: “I heartily congratulate the presidential candidate of our party, the All Progressives Congress, APC, Asiwaju Bola Ahmed Tinubu on his overwhelming victory in the just concluded presidential primary election.

“Let me assure you that the Ebonyi State chapter of All Progressives Congress, and I will support you, and all the candidates of our party in the 2023 general elections.

“Let me equally commend all aspirants and the APC National Working Committee for the smooth conduct of a fair presidential primary election.”

Umahi, however, tasked the national leadership of the ruling APC to come together and unite the force to ensure the victory of all the candidates of the party in the country.

“I encourage the leaders and members of our party to come together to support the party for a victorious journey in the 2023 election,” he stressed.

He assured Tinubu that the Ebonyi State chapter of the party, including himself and all stakeholders would support the former Lagos State governor and all the candidates of the APC in the 2023 general elections.

The governor equally commended all aspirants and the APC National Working Committee for the smooth conduct of the presidential primary election which he described as a fair process.

“I encourage the leaders and members of our party to come together to support the party for a victorious journey in the 2023 elections,” he added.

Governor Sule, on his part, celebrated Tinubu for what he termed a landslide victory at the APC special convention to elect the party’s presidential candidate.

“There is no doubt that Senator Asiwaju Tinubu possesses the requisite experience and political sagacity to represent the APC and go on to win the 2023 presidential election,” he said.

“Even more heart-warming is your posture that you bear no grudges against equally credible party men who contested with you. At this time, let me call on the leadership and members of our great party at all levels to quickly close ranks to confront the task ahead.”

The governor also congratulated and commended President Muhammadu Buhari for ensuring a level playing ground for all aspirants and for his love for the party and the country.

According to him, the President’s selfless disposition and leadership have provided the solution that will strengthen the party and put it firmly on the path to victory at the polls in 2023.

Similarly, Governor Sule commended the National Working Committee of the party chaired by Senator Abdullahi Adamu, the delegates, and all those who contributed to the success of the special convention.

“On our part, we pledge to continue to support you and our great party at all times,” he said.