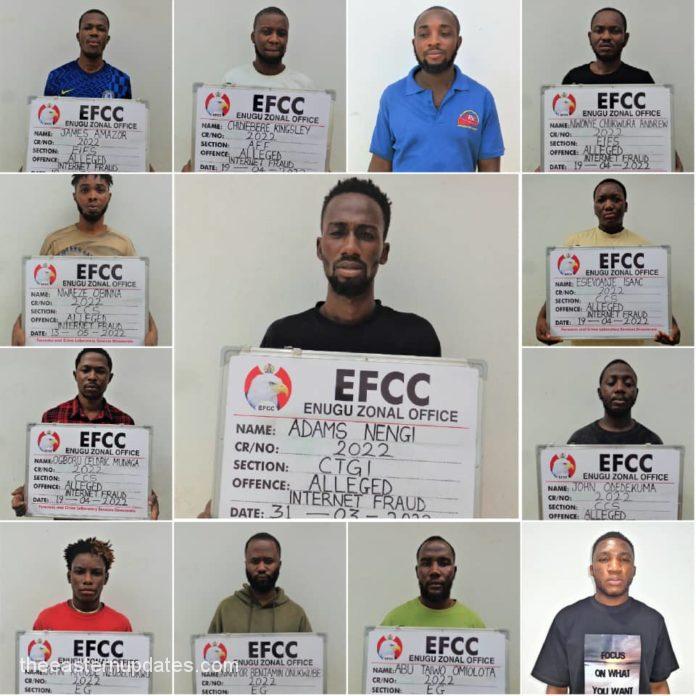 The Enugu Zonal Command of the Economic and Financial Crimes Commission, EFCC, has secured the conviction of no fewer than 14 internet fraudsters before Justice I.M Buba of the Federal High Court, Enugu on charges bordering on obtaining by false pretences and cybercrime.

The charge against Olisaemeka Goodsuccess Udochukwu reads, “that you , Olisaemeka Goodsuccess Udochukwu sometime in 2022 in Enugu within the jurisdiction of the Honourable Court fraudulently impersonated different identities like Charles Edward Bruceson, Layah Heilperm, Greg Foss, Dylan Leclair, Benjamin Cowen, Spencer Will and Altoini Sherpa from United States of America, through your fake Hangout ,WhatsApp, Messenger and Facebook accounts via your iPhone 7 with intent to defraud unsuspecting foreign nationals and thereby committed an offence contrary to Section 22(2)(b)(i) of the Cybercrimes (Prohibition, Prevention, etc)Act,2015 and punishable under Section 22(2)(b) of the same Act”.

All fourteen pleaded guilty to the charges preferred against them.

Justice Buba consequently sentenced them to one year imprisonment with an option of N1 million fine each.