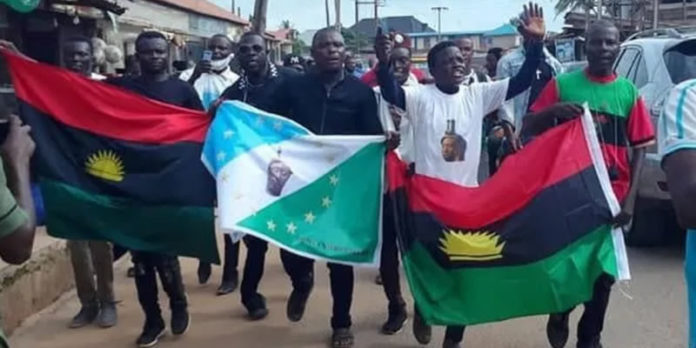 Indigenous People of Biafra (IPOB) has appealed to Yoruba secessionist group, Oduduwa, Middle Belt, Christians in the north, and Nigerians who feel oppressed to join its sit-at-home protest on October 1.

Spokesman for the group, Emma Powerful, in a statement, yesterday, urged various oppressed tribes in the country to set aside their political and religious differences and unite for the protest against the injustices meted on citizens by the Nigerian government.

Said Powerful: ‘Following our earlier declaration of October 1 sit- at -home order issued by the leadership of the Indigenous people of Biafra (IPOB), all Nigeria oppressed tribes should reject the Nigerian government evil agenda against indigenous peoples. We the global family of IPOB, request our brothers and sisters in Oduduwa Republic and Middle Belt who suffer similar fate with us to join hands in sympathy protest.

‘All lovers of freedom, including Christian communities in the north and other parts of Nigeria, who receive humiliation, intimidation and killings from Fulani terrorists, bandits and murderous herdsmen should understand that time has come for all victims of Fulani impunity and atrocities to unite together for resistance. We need to put our differences behind us and rise as one people to defend our ancestral land and heritage. The agitation by IPOB is not for Biafran people alone, but for all oppressed indigenous tribes in Nigeria, including Christian communities in the North. We are fighting for victims of unprovoked genocidal attacks by Fulani jihadist in Yoruba land and Middle Belt. We are demanding justice for oppressed indigenous people in Nigeria. We are fighting for the innocent people of Plateau, Katsina, Adamawa, Zamfara and other parts of the north killed daily by Fulani bandits. We are fighting for the conquered Hausa tribe being enslaved by Fulani cabals. We are also fighting for innocent security agents being wasted by Fulani terrorists in the north through sabotage.’