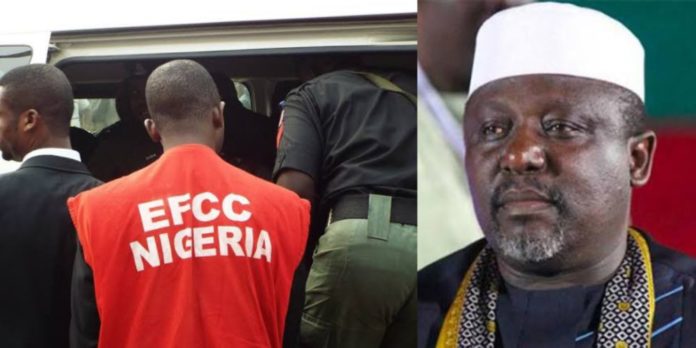 A group known as Igbo Youths For Equity (IYE), has described the recent arrest of the former Governor of Imo State, Senator Rochas Okorocha, by the Economic and Financial Crimes Commission (EFCC) as an affront to the Igbo people.

Recall that Senator Okorocha was arrested by the EFCC on Tuesday based on a petition from the Imo State Government over the alleged excesses of the senator while he was the state governor.

The group’s spokesman, Izundu Marcel, in a statement released in Abuja on Tuesday, expressed concerns over alleged attempts by ‘political hawks’ outside of the South-East to frustrate an Igbo presidency.

He warned that Igbo youths will not fold their hands while some interests continue to allegedly single out their key leaders for humiliation.

‘We are concerned that over the last two years there seems to have been deliberate attempts by a group of “political hawks” from outside Igboland to humiliate and demoralize key leaders from Igboland whom they consider as threats to their ambition to continue denying the Igbos the right to produce the next President of Nigeria in 2023,’ the statement read.

According to the group, Senator Okorocha is one of the most formidable politicians from the South-East and might have been singled out for humiliation and attacks because of alleged 2023 conspiracies.

‘It was former Abia State Governor Senator Orji Uzor Kalu who was unjustly sent to prison by the same EFCC before the Supreme Court came to his rescue. Today, it’s Rochas Okorocha,’ the group observed.

‘We know that other Igbo leaders have been penciled down for political elimination. We warn that Igbo youths cannot continue to watch while our leaders are used as scapegoats for the endemic corruption that has eaten into the fabrics of our public governance, while the main culprits are allowed to continue walking free because they are not Igbos. This affront on Igbos must stop.’

Tension As IPOB Members Are Gunned Down By Soldiers In Abia

How IPOB Can Get Nnamdi Kanu Released – VON DG, Okechukwu